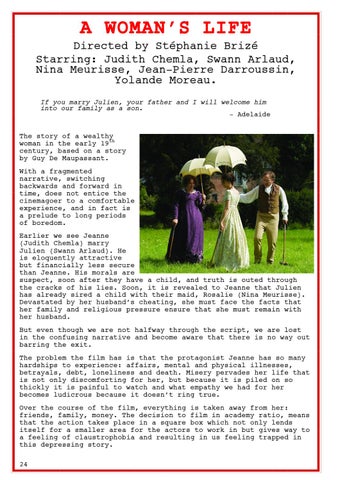 A WOMAN’S LIFE Directed by Stéphanie Brizé Starring: Judith Chemla, Swann Arlaud, Nina Meurisse, Jean-Pierre Darroussin, Yolande Moreau. If you marry Julien, your father and I will welcome him into our family as a son. - Adelaide

The story of a wealthy woman in the early 19th century, based on a story by Guy De Maupassant. With a fragmented narrative, switching backwards and forward in time, does not entice the cinemagoer to a comfortable experience, and in fact is a prelude to long periods of boredom. Earlier we see Jeanne (Judith Chemla) marry Julien (Swann Arlaud). He is eloquently attractive but financially less secure than Jeanne. His morals are suspect, soon after they have a child, and truth is outed through the cracks of his lies. Soon, it is revealed to Jeanne that Julien has already sired a child with their maid, Rosalie (Nina Meurisse). Devastated by her husband’s cheating, she must face the facts that her family and religious pressure ensure that she must remain with her husband. But even though we are not halfway through the script, we are lost in the confusing narrative and become aware that there is no way out barring the exit. The problem the film has is that the protagonist Jeanne has so many hardships to experience: affairs, mental and physical illnesses, betrayals, debt, loneliness and death. Misery pervades her life that is not only discomforting for her, but because it is piled on so thickly it is painful to watch and what empathy we had for her becomes ludicrous because it doesn’t ring true. Over the course of the film, everything is taken away from her: friends, family, money. The decision to film in academy ratio, means that the action takes place in a square box which not only lends itself for a smaller area for the actors to work in but gives way to a feeling of claustrophobia and resulting in us feeling trapped in this depressing story. 24