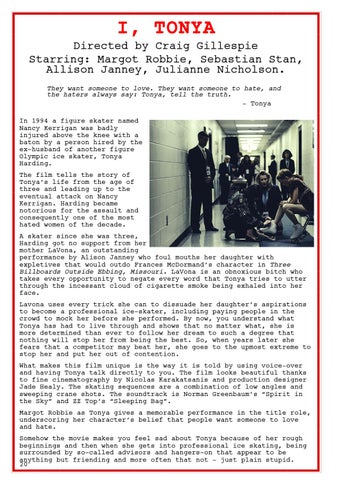 I, TONYA Directed by Craig Gillespie Starring: Margot Robbie, Sebastian Stan, Allison Janney, Julianne Nicholson. They want someone to love. They want someone to hate, and the haters always say: Tonya, tell the truth. - Tonya In 1994 a figure skater named Nancy Kerrigan was badly injured above the knee with a baton by a person hired by the ex-husband of another figure Olympic ice skater, Tonya Harding. The film tells the story of Tonya’s life from the age of three and leading up to the eventual attack on Nancy Kerrigan. Harding became notorious for the assault and consequently one of the most hated women of the decade. A skater since she was three, Harding got no support from her mother LaVona, an outstanding performance by Alison Janney who foul mouths her daughter with expletives that would outdo Frances McDormand’s character in Three Billboards Outside Ebbing, Missouri. LaVona is an obnoxious bitch who takes every opportunity to negate every word that Tonya tries to utter through the incessant cloud of cigarette smoke being exhaled into her face. Lavona uses every trick she can to dissuade her daughter’s aspirations to become a professional ice-skater, including paying people in the crowd to mock her before she performed. By now, you understand what Tonya has had to live through and shows that no matter what, she is more determined than ever to follow her dream to such a degree that nothing will stop her from being the best. So, when years later she fears that a competitor may beat her, she goes to the upmost extreme to stop her and put her out of contention. What makes this film unique is the way it is told by using voice-over and having Tonya talk directly to you. The film looks beautiful thanks to fine cinematography by Nicolas Karakatsanis and production designer Jade Healy. The skating sequences are a combination of low angles and sweeping crane shots. The soundtrack is Norman Greenbaum’s “Spirit in the Sky” and ZZ Top’s “Sleeping Bag”. Margot Robbie as Tonya gives a memorable performance in the title role, underscoring her character’s belief that people want someone to love and hate.

Somehow the movie makes you feel sad about Tonya because of her rough beginnings and then when she gets into professional ice skating, being surrounded by so-called advisors and hangers-on that appear to be anything but friending and more often that not - just plain stupid. 20