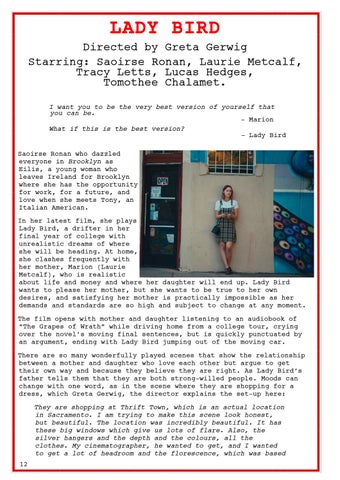 LADY BIRD Directed by Greta Gerwig Starring: Saoirse Ronan, Laurie Metcalf, Tracy Letts, Lucas Hedges, Tomothee Chalamet. I want you to be the very best version of yourself that you can be. - Marion What if this is the best version? - Lady Bird Saoirse Ronan who dazzled everyone in Brooklyn as Eilis, a young woman who leaves Ireland for Brooklyn where she has the opportunity for work, for a future, and love when she meets Tony, an Italian American. In her latest film, she plays Lady Bird, a drifter in her final year of college with unrealistic dreams of where she will be heading. At home, she clashes frequently with her mother, Marion (Laurie Metcalf), who is realistic about life and money and where her daughter will end up. Lady Bird wants to please her mother, but she wants to be true to her own desires, and satisfying her mother is practically impossible as her demands and standards are so high and subject to change at any moment. The film opens with mother and daughter listening to an audiobook of “The Grapes of Wrath” while driving home from a college tour, crying over the novel’s moving final sentences, but is quickly punctuated by an argument, ending with Lady Bird jumping out of the moving car. There are so many wonderfully played scenes that show the relationship between a mother and daughter who love each other but argue to get their own way and because they believe they are right. As Lady Bird’s father tells them that they are both strong-willed people. Moods can change with one word, as in the scene where they are shopping for a dress, which Greta Gerwig, the director explains the set-up here: They are shopping at Thrift Town, which is an actual location in Sacramento. I am trying to make this scene look honest, but beautiful. The location was incredibly beautiful. It has these big windows which give us lots of flare. Also, the silver hangers and the depth and the colours, all the clothes. My cinematographer, he wanted to get, and I wanted to get a lot of headroom and the florescence, which was based 12