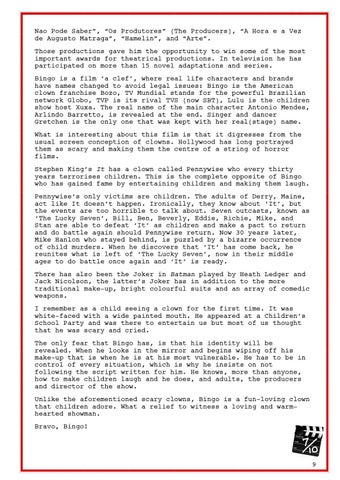 Nao Pode Saber”, “Os Produtores” (The Producers), “A Hora e a Vez de Augusto Matraga”, “Hamelin”, and “Arte”. Those productions gave him the opportunity to win some of the most important awards for theatrical productions. In television he has participated on more than 15 novel adaptations and series. Bingo is a film ‘a clef’, where real life characters and brands have names changed to avoid legal issues: Bingo is the American clown franchise Bozo, TV Mundial stands for the powerful Brazilian network Globo, TVP is its rival TVS (now SBT), Lulu is the children show host Xuxa. The real name of the main character Antonio Mendes, Arlindo Barretto, is revealed at the end. Singer and dancer Gretchen is the only one that was kept with her real(stage) name. What is interesting about this film is that it digresses from the usual screen conception of clowns. Hollywood has long portrayed them as scary and making them the centre of a string of horror films. Stephen King’s It has a clown called Pennywise who every thirty years terrorises children. This is the complete opposite of Bingo who has gained fame by entertaining children and making them laugh. Pennywise’s only victims are children. The adults of Derry, Maine, act like It doesn’t happen. Ironically, they know about ‘It’, but the events are too horrible to talk about. Seven outcasts, known as ‘The Lucky Seven’, Bill, Ben, Beverly, Eddie, Richie, Mike, and Stan are able to defeat ‘It’ as children and make a pact to return and do battle again should Pennywise return. Now 30 years later, Mike Hanlon who stayed behind, is puzzled by a bizarre occurrence of child murders. When he discovers that ‘It’ has come back, he reunites what is left of ‘The Lucky Seven’, now in their middle ages to do battle once again and ‘It’ is ready. There has also been the Joker in Batman played by Heath Ledger and Jack Nicolson, the latter’s Joker has in addition to the more traditional make-up, bright colourful suits and an array of comedic weapons. I remember as a child seeing a clown for the first time. It was white-faced with a wide painted mouth. He appeared at a Children’s School Party and was there to entertain us but most of us thought that he was scary and cried. The only fear that Bingo has, is that his identity will be revealed. When he looks in the mirror and begins wiping off his make-up that is when he is at his most vulnerable. He has to be in control of every situation, which is why he insists on not following the script written for him. He knows, more than anyone, how to make children laugh and he does, and adults, the producers and director of the show. Unlike the aforementioned scary clowns, Bingo is a fun-loving clown that children adore. What a relief to witness a loving and warmhearted showman. Bravo, Bingo!