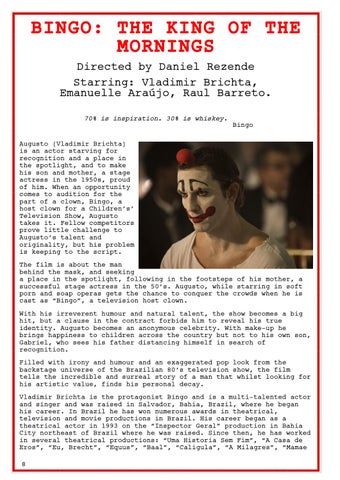 BINGO: THE KING OF THE MORNINGS Directed by Daniel Rezende Starring: Vladimir Brichta, Emanuelle Araújo, Raul Barreto. 70% is inspiration. 30% is whiskey. Bingo Augusto (Vladimir Brichta) is an actor starving for recognition and a place in the spotlight, and to make his son and mother, a stage actress in the 1950s, proud of him. When an opportunity comes to audition for the part of a clown, Bingo, a host clown for a Children’s’ Television Show, Augusto takes it. Fellow competitors prove little challenge to Augusto’s talent and originality, but his problem is keeping to the script. The film is about the man behind the mask, and seeking a place in the spotlight, following in the footsteps of his mother, a successful stage actress in the 50’s. Augusto, while starring in soft porn and soap operas gets the chance to conquer the crowds when he is cast as “Bingo”, a television host clown. With his irreverent humour and natural talent, the show becomes a big hit, but a clause in the contract forbids him to reveal his true identity. Augusto becomes an anonymous celebrity. With make-up he brings happiness to children across the country but not to his own son, Gabriel, who sees his father distancing himself in search of recognition. Filled with irony and humour and an exaggerated pop look from the backstage universe of the Brazilian 80’s television show, the film tells the incredible and surreal story of a man that whilst looking for his artistic value, finds his personal decay. Vladimir Brichta is the protagonist Bingo and is a multi-talented actor and singer and was raised in Salvador, Bahia, Brazil, where he began his career. In Brazil he has won numerous awards in theatrical, television and movie productions in Brazil. His career began as a theatrical actor in 1993 on the “Inspector Geral” production in Bahia City northeast of Brazil where he was raised. Since then, he has worked in several theatrical productions: “Uma Historia Sem Fim”, “A Casa de Eros”, “Eu, Brecht”, “Equus”, “Baal”, “Caligula”, “A Milagres”, “Mamae 8