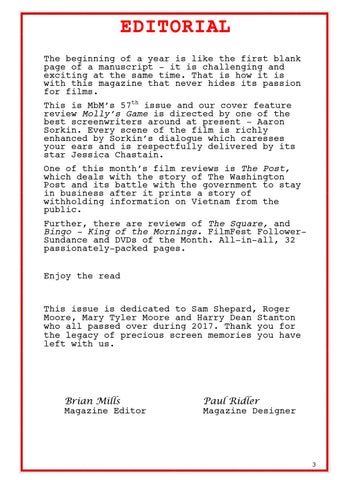 EDITORIAL The beginning of a year is like the first blank page of a manuscript – it is challenging and exciting at the same time. That is how it is with this magazine that never hides its passion for films. This is MbM’s 57th issue and our cover feature review Molly’s Game is directed by one of the best screenwriters around at present – Aaron Sorkin. Every scene of the film is richly enhanced by Sorkin’s dialogue which caresses your ears and is respectfully delivered by its star Jessica Chastain. One of this month’s film reviews is The Post, which deals with the story of The Washington Post and its battle with the government to stay in business after it prints a story of withholding information on Vietnam from the public. Further, there are reviews of The Square, and Bingo – King of the Mornings. FilmFest FollowerSundance and DVDs of the Month. All-in-all, 32 passionately-packed pages. Enjoy the read

This issue is dedicated to Sam Shepard, Roger Moore, Mary Tyler Moore and Harry Dean Stanton who all passed over during 2017. Thank you for the legacy of precious screen memories you have left with us.