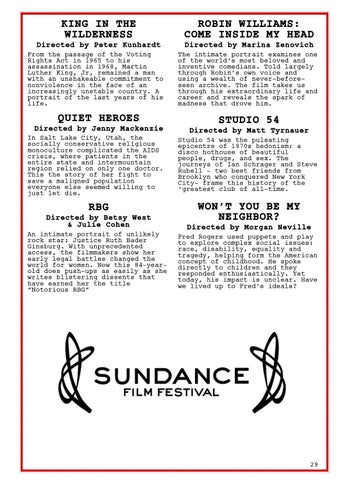 KING IN THE WILDERNESS

ROBIN WILLIAMS: COME INSIDE MY HEAD

From the passage of the Voting Rights Act in 1965 to his assassination in 1968, Martin Luther King, Jr, remained a man with an unshakeable commitment to nonviolence in the face of an increasingly unstable country. A portrait of the last years of his life.

QUIET HEROES Directed by Jenny Mackenzie In Salt Lake City, Utah, the socially conservative religious monoculture complicated the AIDS crisis, where patients in the entire state and intermountain region relied on only one doctor. This the story of her fight to save a maligned population everyone else seemed willing to just let die.

RBG Directed by Betsy West & Julie Cohen An intimate portrait of unlikely rock star: Justice Ruth Bader Ginsburg. With unprecedented access, the filmmakers show her early legal battles changed the world for women. Now this 84-yearold does push-ups as easily as she writes blistering dissents that have earned her the title “Notorious RBG”

The intimate portrait examines one of the world’s most beloved and inventive comedians. Told largely through Robin’s own voice and using a wealth of never-beforeseen archive. The film takes us through his extraordinary life and career and reveals the spark of madness that drove him.

STUDIO 54 Directed by Matt Tyrnauer Studio 54 was the pulsating epicentre of 1970s hedonism: a disco hothouse of beautiful people, drugs, and sex. The journeys of Ian Schrager and Steve Rubell – two best friends from Brooklyn who conquered New York City- frame this history of the ‘greatest club of all-time.

WON’T YOU BE MY NEIGHBOR? Directed by Morgan Neville Fred Rogers used puppets and play to explore complex social issues: race, disability, equality and tragedy, helping form the American concept of childhood. He spoke directly to children and they responded enthusiastically. Yet today, his impact is unclear. Have we lived up to Fred’s ideals?