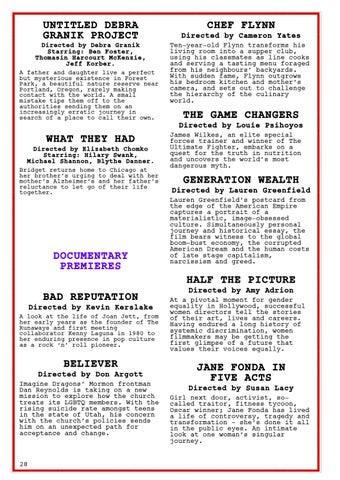 UNTITLED DEBRA GRANIK PROJECT Directed by Debra Granik Starring: Ben Foster, Thomasin Harcourt McKenzie, Jeff Korber. A father and daughter live a perfect but mysterious existence in Forest Park, a beautiful nature reserve near Portland, Oregon, rarely making contact with the world. A small mistake tips them off to the authorities sending them on an increasingly erratic journey in search of a place to call their own.

CHEF FLYNN Directed by Cameron Yates Ten-year-old Flynn transforms his living room into a supper club, using his classmates as line cooks and serving a tasting menu foraged from his neighbours’ backyards. With sudden fame, Flynn outgrows his bedroom kitchen and mother’s camera, and sets out to challenge the hierarchy of the culinary world.

James Wilkes, an elite special forces trainer and winner of The Ultimate Fighter, embarks on a quest for the truth in nutrition and uncovers the world’s most dangerous myth.

GENERATION WEALTH Directed by Lauren Greenfield Lauren Greenfield’s postcard from the edge of the American Empire captures a portrait of a materialistic, image-obsessed culture. Simultaneously personal journey and historical essay, the film bears witness to the global boom-bust economy, the corrupted American Dream and the human costs of late stage capitalism, narcissism and greed.

HALF THE PICTURE BAD REPUTATION Directed by Kevin Kerslake A look at the life of Joan Jett, from her early years as the founder of The Runaways and first meeting collaborator Kenny Laguna in 1980 to her enduring presence in pop culture as a rock ‘n’ roll pioneer.

BELIEVER Directed by Don Argott Imagine Dragons’ Mormon frontman Dan Reynolds is taking on a new mission to explore how the church treats its LGBTQ members. With the rising suicide rate amongst teens in the state of Utah, his concern with the church’s policies sends him on an unexpected path for acceptance and change.

Directed by Amy Adrion At a pivotal moment for gender equality in Hollywood, successful women directors tell the stories of their art, lives and careers. Having endured a long history of systemic discrimination, women filmmakers may be getting the first glimpse of a future that values their voices equally.

JANE FONDA IN FIVE ACTS Directed by Susan Lacy Girl next door, activist, socalled traitor, fitness tycoon, Oscar winner; Jane Fonda has lived a life of controversy, tragedy and transformation – she’s done it all in the public eyes. An intimate look at one woman’s singular journey.