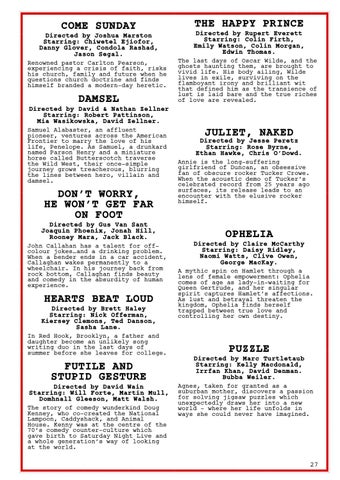 Renowned pastor Carlton Pearson, experiencing a crisis of faith, risks his church, family and future when he questions church doctrine and finds himself branded a modern-day heretic.

The last days of Oscar Wilde, and the ghosts haunting them, are brought to vivid life. His body ailing, Wilde lives in exile, surviving on the flamboyant irony and brilliant wit that defined him as the transience of lust is laid bare and the true riches of love are revealed.

DON’T WORRY, HE WON’T GET FAR ON FOOT Directed by Gus Van Sant Joaquin Phoenix, Jonah Hill, Rooney Mara, Jack Black. John Callahan has a talent for offcolour jokes…and a drinking problem. When a bender ends in a car accident, Callaghan wakes permanently to a wheelchair. In his journey back from rock bottom, Callaghan finds beauty and comedy in the absurdity of human experience.

FUTILE AND STUPID GESTURE Directed by David Wain Starring: Will Forte, Martin Mull, Domhnall Gleeson, Matt Walsh. The story of comedy wunderkind Doug Kenney, who co-created the National Lampoon, Caddyshack, and Animal House. Kenny was at the centre of the 70’s comedy counter-culture which gave birth to Saturday Night Live and a whole generation’s way of looking at the world.

JULIET, NAKED Directed by Jesse Peretz Starring: Rose Byrne, Ethan Hawke, Chris O’Dowd. Annie is the long-suffering girlfriend of Duncan, an obsessive fan of obscure rocker Tucker Crowe. When the acoustic demo of Tucker’s celebrated record from 25 years ago surfaces, its release leads to an encounter with the elusive rocker himself.

OPHELIA Directed by Claire McCarthy Starring: Daisy Ridley, Naomi Watts, Clive Owen, George MacKay. A mythic spin on Hamlet through a lens of female empowerment: Ophelia comes of age as lady-in-waiting for Queen Gertrude, and her singular spirit captures Hamlet’s affections. As lust and betrayal threaten the kingdom, Ophelia finds herself trapped between true love and controlling her own destiny.

PUZZLE Directed by Marc Turtletaub Starring: Kelly Macdonald, Irrfan Khan, David Denman. Bubba Weiler. Agnes, taken for granted as a suburban mother, discovers a passion for solving jigsaw puzzles which unexpectedly draws her into a new world – where her life unfolds in ways she could never have imagined.