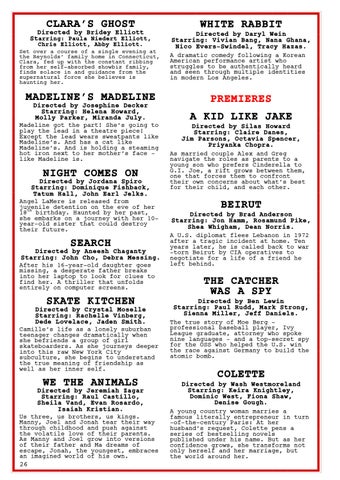 CLARA’S GHOST Directed by Bridey Elliott Starring: Paula Niedert Elliott, Chris Elliott, Abby Elliott. Set over a course of a single evening at the Reynolds’ family home in Connecticut, Clara, fed up with the constant ribbing from her self-absorbed showbiz family, finds solace in and guidance from the supernatural force she believes is haunting her.

NIGHT COMES ON Directed by Jordana Spiro Starring: Dominique Fishback, Tatum Hall, John Earl Jelks. Angel LaMere is released from juvenile detention on the eve of her 18th birthday. Haunted by her past, she embarks on a journey with her 10year-old sister that could destroy their future.

SEARCH Directed by Aneesh Chaganty Starring: John Cho, Debra Messing. After his 16-year-old daughter goes missing, a desperate father breaks into her laptop to look for clues to find her. A thriller that unfolds entirely on computer screens.

SKATE KITCHEN Directed by Crystal Moselle Starring: Rachelle Vinberg, Dede Lovelace, Jaden Smith. Camille’s life as a lonely suburban teenager changes dramatically when she befriends a group of girl skateboarders. As she journeys deeper into this raw New York City subculture, she begins to understand the true meaning of friendship as well as her inner self.

WE THE ANIMALS Directed by Jeremiah Zagar Starring: Raul Castillo, Sheila Vand, Evan Rosardo, Isaiah Kristian. Us three, us brothers, us kings. Manny, Joel and Jonah tear their way through childhood and push against the volatile love of their parents. As Manny and Joel grow into versions of their father and Ma dreams of escape, Jonah, the youngest, embraces an imagined world of his own.

PREMIERES A KID LIKE JAKE Directed by Silas Howard Starring: Claire Danes, Jim Parsons, Octavia Spencer, Priyanka Chopra. As married couple Alex and Greg navigate the roles as parents to a young son who prefers Cinderella to G.I. Joe, a rift grows between them, one that forces them to confront their own concerns about what’s best for their child, and each other.

BEIRUT Directed by Brad Anderson Starring: Jon Hamm, Rosamund Pike, Shea Whigham, Dean Norris. A U.S. diplomat flees Lebanon in 1972 after a tragic incident at home. Ten years later, he is called back to war -torn Beirut by CIA operatives to negotiate for a life of a friend he left behind.

THE CATCHER WAS A SPY Directed by Ben Lewin Starring: Paul Rudd, Mark Strong, Sienna Miller, Jeff Daniels. The true story of Moe Berg – professional baseball player, Ivy League graduate, attorney who spoke nine languages – and a top-secret spy for the OSS who helped the U.S. win the race against Germany to build the atomic bomb.

COLETTE Directed by Wash Westmoreland Starring: Keira Knightley, Dominic West, Fiona Shaw, Denise Gough. A young country woman marries a famous literally entrepreneur in turn -of-the-century Paris: At her husband’s request, Colette pens a series of bestselling novels published under his name. But as her confidence grows, she transforms not only herself and her marriage, but the world around her.