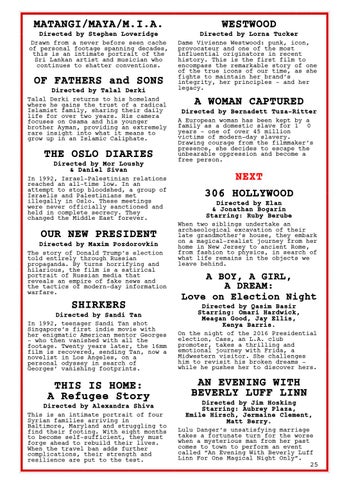 Drawn from a never before seen cache of personal footage spanning decades, this is an intimate portrait of the Sri Lankan artist and musician who continues to shatter conventions.

Dame Vivienne Westwood: punk, icon, provocateur and one of the most influential originators in recent history. This is the first film to encompass the remarkable story of one of the true icons of our time, as she fights to maintain her brand’s integrity, her principles – and her legacy.

OF FATHERS and SONS Directed by Talal Derki Talal Derki returns to his homeland where he gains the trust of a radical Islamist family, sharing their daily life for over two years. His camera focuses on Osama and his younger brother Ayman, providing an extremely rare insight into what it means to grow up in an Islamic Caliphate.

THE OSLO DIARIES Directed by Mor Loushy & Daniel Sivan In 1992, Israel-Palestinian relations reached an all-time low. In an attempt to stop bloodshed, a group of Israelis and Palestinians met illegally in Oslo. These meetings were never officially sanctioned and held in complete secrecy. They changed the Middle East forever.

OUR NEW PRESIDENT Directed by Maxim Pozdorovkin The story of Donald Trump’s election told entirely through Russian propaganda. By turns horrifying and hilarious, the film is a satirical portrait of Russian media that reveals an empire of fake news and the tactics of modern-day information warfare.

SHIRKERS Directed by Sandi Tan In 1992, teenager Sandi Tan shot Singapore’s first indie movie with her enigmatic American mentor Georges – who then vanished with all the footage. Twenty years later, the 16mm film is recovered, sending Tan, now a novelist in Los Angeles, on a personal odyssey in search of Georges’ vanishing footprints.

THIS IS HOME: A Refugee Story Directed by Alexandra Shiva This is an intimate portrait of four Syrian families arriving in Baltimore, Maryland and struggling to find their footing. With eight months to become self-sufficient, they must forge ahead to rebuild their lives. When the travel ban adds further complications, their strength and resilience are put to the test.

A WOMAN CAPTURED Directed by Bernadett Tuza-Ritter A European woman has been kept by a family as a domestic slave for 1 0 years – one of over 45 million victims of modern-day slavery. Drawing courage from the filmmaker’s presence, she decides to escape the unbearable oppression and become a free person.

NEXT 306 HOLLYWOOD Directed by Elan & Jonathan Bogarin Starring: Ruby Berube When two siblings undertake an archaeological excavation of their late grandmother’s house, they embark on a magical-realist journey from her home in New Jersey to ancient Rome, from fashion to physics, in search of what life remains in the objects we leave behind.

A BOY, A GIRL, A DREAM: Love on Election Night Directed by Qasim Basir Starring: Omari Hardwick, Meagan Good, Jay Ellis, Kenya Barris. On the night of the 2016 Presidential election, Cass, an L.A. club promoter, takes a thrilling and emotional journey with Frida, a Midwestern visitor. She challenges him to revisit his broken dreams – while he pushes her to discover hers.

AN EVENING WITH BEVERLY LUFF LINN Directed by Jim Hosking Starring: Aubrey Plaza, Emile Hirsch, Jermaine Clement, Matt Berry. Lulu Danger’s unsatisfying marriage takes a fortunate turn for the worse when a mysterious man from her past comes to town to perform an event called “An Evening With Beverly Luff Linn For One Magical Night Only”.