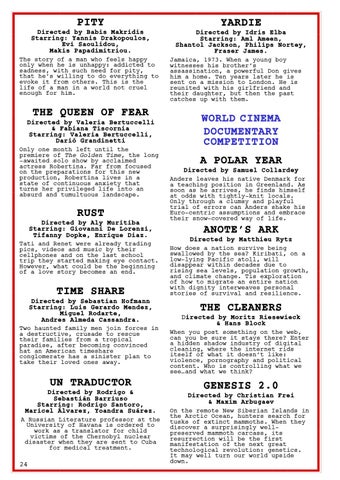 The story of a man who feels happy only when he is unhappy: addicted to sadness, with such need for pity, that he’s willing to do everything to evoke it from others. This is the life of a man in a world not cruel enough for him.

THE QUEEN OF FEAR Directed by Valeria Bertuccelli & Fabiana Tiscornia Starring: Valeria Bertuccelli, Darió Grandinetti Only one month left until the premiere of The Golden Time, the long -awaited solo show by acclaimed actress Robertina. Far from focused on the preparations for this new production, Robertina lives in a state of continuous anxiety that turns her privileged life into an absurd and tumultuous landscape.

RUST Directed by Aly Muritiba Starring: Giovanni De Lorenzi, Tifanny Dopke, Enrique Diaz. Tati and Renet were already trading pics, videos and music by their cellphones and on the last school trip they started making eye contact. However, what could be the beginning of a love story becomes an end.

UN TRADUCTOR Directed by Rodrigo & Sebastián Barriuso Starring: Rodrigo Santoro, Maricel Álvarez, Yoandra Suárez. A Russian Literature professor at the University of Havana is ordered to work as a translator for child victims of the Chernobyl nuclear disaster when they are sent to Cuba for medical treatment.

Jamaica, 1973. When a young boy witnesses his brother’s assassination, a powerful Don gives him a home. Ten years later he is sent on a mission to London. He is reunited with his girlfriend and their daughter, but then the past catches up with them.

WORLD CINEMA DOCUMENTARY COMPETITION A POLAR YEAR Directed by Samuel Collardey Anders leaves his native Denmark for a teaching position in Greenland. As soon as he arrives, he finds himself at odds with tightly-knit locals. Only through a clumsy and playful trial of errors can Anders shake his Euro-centric assumptions and embrace their snow-covered way of life.

ANOTE’S ARK Directed by Matthieu Rytz How does a nation survive being swallowed by the sea? Kiribati, on a low-lying Pacific atoll, will disappear within decades due to rising sea levels, population growth, and climate change. Tis exploration of how to migrate an entire nation with dignity interweaves personal stories of survival and resilience.

THE CLEANERS Directed by Moritz Riesewieck & Hans Block When you post something on the web, can you be sure it stays there? Enter a hidden shadow industry of digital cleaning, where the internet rids itself of what it doesn’t like: violence, pornography and political content. Who is controlling what we see…and what we think?

GENESIS 2.0 Directed by Christian Frei & Maxim Arbugaev On the remote New Siberian Islands in the Arctic Ocean, hunters search for tusks of extinct mammoths. When they discover a surprisingly wellpreserved mammoth carcass, its resurrection will be the first manifestation of the next great technological revolution: genetics. It may well turn our world upside down.