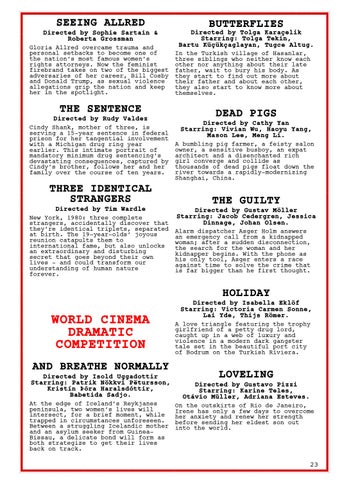 Gloria Allred overcame trauma and personal setbacks to become one of the nation’s most famous women’s rights attorneys. Now the feminist firebrand takes on two of the biggest adversaries of her career, Bill Cosby and Donald Trump, as sexual violence allegations grip the nation and keep her in the spotlight.

THE SENTENCE Directed by Rudy Valdez Cindy Shank, mother of three, is serving a 15-year sentence in federal prison for her tangential involvement with a Michigan drug ring year earlier. This intimate portrait of mandatory minimum drug sentencing’s devastating consequences, captured by Cindy’s brother, follows her and her family over the course of ten years.

THREE IDENTICAL STRANGERS Directed by Tim Wardle New York, 1980: three complete strangers, accidentally discover that they’re identical triplets, separated at birth. The 19-year-olds’ joyous reunion catapults them to international fame, but also unlocks an extraordinary and disturbing secret that goes beyond their own lives – and could transform our understanding of human nature forever.

THE GUILTY Directed by Gustav Möller Starring: Jacob Cedergren, Jessica Dinnage, Johan Olsen. Alarm dispatcher Asger Holm answers an emergency call from a kidnapped woman; after a sudden disconnection, the search for the woman and her kidnapper begins. With the phone as his only tool, Asger enters a race against time to solve the crime that is far bigger than he first thought.

WORLD CINEMA DRAMATIC COMPETITION AND BREATHE NORMALLY Directed by Isold Uggadottir Starring: Patrik Nökkvi Pëtursson, Kristín Þóra Haralsdóttir, Babetida Sadjo. At the edge of Iceland’s Reykjanes peninsula, two women’s lives will intersect, for a brief moment, while trapped in circumstances unforeseen. Between a struggling Icelandic mother and an asylum seeker from GuineaBissau, a delicate bond will form as both strategize to get their lives back on track.

Directed by Isabella Eklöf Starring: Victoria Carmen Sonne, Lai Yde, Thijs Römer. A love triangle featuring the trophy girlfriend of a petty drug lord, caught up in a web of luxury and violence in a modern dark gangster tale set in the beautiful port city of Bodrum on the Turkish Riviera.

LOVELING Directed by Gustavo Pizzi Starring: Karine Teles, Otávio Müller, Adriana Esteves. On the outskirts of Rio de Janeiro, Irene has only a few days to overcome her anxiety and renew her strength before sending her eldest son out into the world.