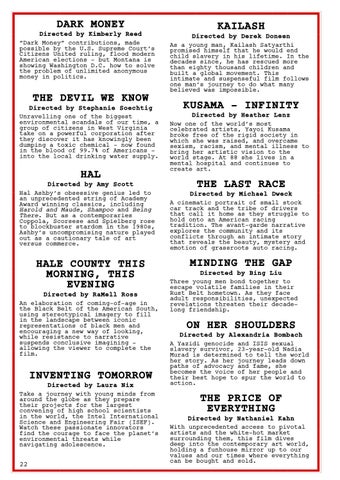 THE DEVIL WE KNOW Directed by Stephanie Soechtig Unravelling one of the biggest environmental scandals of our time, a group of citizens in West Virginia take on a powerful corporation after they discover it has knowingly been dumping a toxic chemical – now found in the blood of 99.7% of Americans – into the local drinking water supply.

HAL Directed by Amy Scott Hal Ashby’s obsessive genius led to an unprecedented string of Academy Award winning classics, including Harold and Maude, Shampoo and Being There. But as a contemporaries Coppola, Scorsese and Spielberg rose to blockbuster stardom in the 1980s, Ashby’s uncompromising nature played out as a cautionary tale of art versus commerce.

HALE COUNTY THIS MORNING, THIS EVENING Directed by RaMell Ross An elaboration of coming-of-age in the Black Belt of the American South, using stereotypical imagery to fill in the landscape between iconic representations of black men and encouraging a new way of looking, while resistance to narrative suspends conclusive imagining – allowing the viewer to complete the film.

INVENTING TOMORROW Directed by Laura Nix Take a journey with young minds from around the globe as they prepare their projects for the largest convening of high school scientists in the world, the Intel International Science and Engineering Fair (ISEF). Watch these passionate innovators find the courage to face the planet’s environmental threats while navigating adolescence.

KAILASH Directed by Derek Doneen As a young man, Kailash Satyarthi promised himself that he would end child slavery in his lifetime. In the decades since, he has rescued more than eighty thousand children and built a global movement. This intimate and suspenseful film follows one man’s journey to do what many believed was impossible.

KUSAMA – INFINITY Directed by Heather Lenz Now one of the world’s most celebrated artists, Yayoi Kusama broke free of the rigid society in which she was raised, and overcame sexism, racism, and mental illness to bring her artistic vision to the world stage. At 88 she lives in a mental hospital and continues to create art.

THE LAST RACE Directed by Michael Dweck A cinematic portrait of small stock car track and the tribe of drivers that call it home as they struggle to hold onto an American racing tradition. The avant-garde narrative explores the community and its conflicts through an intimate story that reveals the beauty, mystery and emotion of grassroots auto racing.

ON HER SHOULDERS Directed by Alexandria Bombach A Yazidi genocide and ISIS sexual slavery survivor, 23-year-old Nadia Murad is determined to tell the world her story. As her journey leads down paths of advocacy and fame, she becomes the voice of her people and their best hope to spur the world to action.

THE PRICE OF EVERYTHING Directed by Nathaniel Kahn With unprecedented access to pivotal artists and the white-hot market surrounding them, this film dives deep into the contemporary art world, holding a funhouse mirror up to our values and our times where everything can be bought and sold.