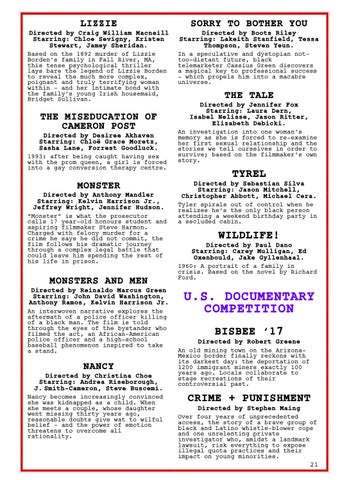 SORRY TO BOTHER YOU

Based on the 1892 murder of Lizzie Borden’s family in Fall River, MA, this tense psychological thriller lays bare the legend of Lizzie Borden to reveal the much more complex, poignant and truly terrifying woman within – and her intimate bond with the family’s young Irish housemaid, Bridget Sullivan.

In a speculative and dystopian nottoo-distant future, black telemarketer Cassius Green discovers a magical key to professional success – which propels him into a macabre universe.

THE MISEDUCATION OF CAMERON POST Directed by Desiree Akhaven Starring: Chloë Grace Moretz, Sasha Lane, Forrest Goodluck. 1993: after being caught having sex with the prom queen, a girl is forced into a gay conversion therapy centre.

MONSTER Directed by Anthony Mandler Starring: Kelvin Harrison Jr., Jeffrey Wright, Jennifer Hudson. “Monster” is what the prosecutor calls 17 year-old honours student and aspiring filmmaker Steve Harmon. Charged with felony murder for a crime he says he did not commit, the film follows his dramatic journey through a complex legal battle that could leave him spending the rest of his life in prison.

MONSTERS AND MEN Directed by Reinaldo Marcus Green Starring: John David Washington, Anthony Ramos, Kelvin Harrison Jr. An interwoven narrative explores the aftermath of a police officer killing of a black man. The film is told through the eyes of the bystander who filmed the act, an African-American police officer and a high-school baseball phenomenon inspired to take a stand.

NANCY Directed by Christina Choe Starring: Andrea Riseborough, J. Smith-Cameron, Steve Buscemi. Nancy becomes increasingly convinced she was kidnapped as a child. When she meets a couple, whose daughter went missing thirty years ago, reasonable doubts give wat to wilful belief – and the power of emotion threatens to overcome all rationality.

THE TALE Directed by Jennifer Fox Starring: Laura Dern, Isabel Nelisse, Jason Ritter, Elizabeth Debicki. An investigation into one woman’s memory as she is forced to re-examine her first sexual relationship and the stories we tell ourselves in order to survive; based on the filmmaker’s own story.

WILDLIFE! Directed by Paul Dano Starring: Carey Mulligan, Ed Oxenbould, Jake Gyllenhaal. 1960: A portrait of a family in crisis. Based on the novel by Richard Ford.

U.S. DOCUMENTARY COMPETITION BISBEE ‘17 Directed by Robert Greene An old mining town on the ArizonaMexico border finally reckons with its darkest day: the deportation of 1200 immigrant miners exactly 100 years ago. Locals collaborate to stage recreations of their controversial past.

CRIME + PUNISHMENT Directed by Stephen Maing Over four years of unprecedented access, the story of a brave group of black and Latino whistle-blower cops and one unrelenting private investigator who, amidst a landmark lawsuit, risk everything to expose illegal quota practices and their impact on young minorities.