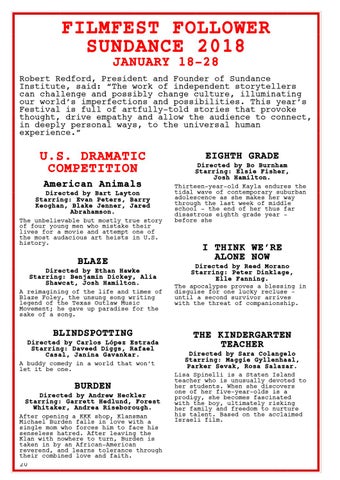 FILMFEST FOLLOWER SUNDANCE 2018 JANUARY 18-28 Robert Redford, President and Founder of Sundance Institute, said: “The work of independent storytellers can challenge and possibly change culture, illuminating our world’s imperfections and possibilities. This year’s Festival is full of artfully-told stories that provoke thought, drive empathy and allow the audience to connect, in deeply personal ways, to the universal human experience.”

BLAZE Directed by Ethan Hawke Starring: Benjamin Dickey, Alia Shawcat, Josh Hamilton. A reimagining of the life and times of Blaze Foley, the unsung song writing legend of the Texas Outlaw Music Movement; he gave up paradise for the sake of a song.

BLINDSPOTTING Directed by Carlos López Estrada Starring: Daveed Diggs, Rafael Casal, Janina Gavankar. A buddy comedy in a world that won’t let it be one.

BURDEN Directed by Andrew Heckler Starring: Garrett Hedlund, Forest Whitaker, Andrea Riseborough. After opening a KKK shop, Klansman Michael Burden falls in love with a single mom who forces him to face his senseless hatred. After leaving the Klan with nowhere to turn, Burden is taken in by an African-American reverend, and learns tolerance through their combined love and faith.

EIGHTH GRADE Directed by Bo Burnham Starring: Elsie Fisher, Josh Hamilton. Thirteen-year-old Kayla endures the tidal wave of contemporary suburban adolescence as she makes her way through the last week of middle school – the end of her thus far disastrous eighth grade year – before she

I THINK WE’RE ALONE NOW Directed by Reed Morano Starring: Peter Dinklage, Elle Fanning. The apocalypse proves a blessing in disguise for one lucky recluse – until a second survivor arrives with the threat of companionship.

THE KINDERGARTEN TEACHER Directed by Sara Colangelo Starring: Maggie Gyllenhaal, Parker Sevak, Rosa Salazar. Lisa Spinelli is a Staten Island teacher who is unusually devoted to her students. When she discovers one of her five-year-olds is a prodigy, she becomes fascinated with the boy, ultimately risking her family and freedom to nurture his talent. Based on the acclaimed Israeli film.