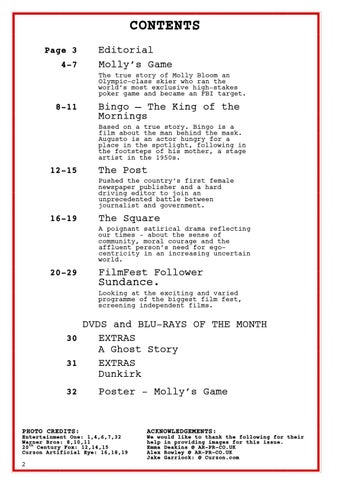 Editorial Molly’s Game The true story of Molly Bloom an Olympic-class skier who ran the world’s most exclusive high-stakes poker game and became an FBI target.

Bingo — The King of the Mornings Based on a true story. Bingo is a film about the man behind the mask. Augusto is an actor hungry for a place in the spotlight, following in the footsteps of his mother, a stage artist in the 1950s.

The Post Pushed the country’s first female newspaper publisher and a hard driving editor to join an unprecedented battle between journalist and government.

The Square A poignant satirical drama reflecting our times – about the sense of community, moral courage and the affluent person’s need for egocentricity in an increasing uncertain world.

Sundance. Looking at the exciting and varied programme of the biggest film fest, screening independent films.

We would like to thank the following for their help in providing images for this issue. Emma Deakins @ AR-PR-CO.UK Alex Rowley @ AR-PR-CO.UK Jake Garriock: @ Curzon.com