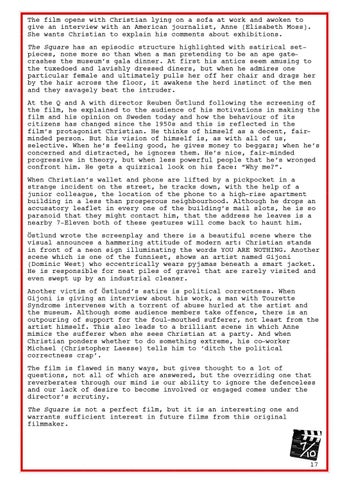 The film opens with Christian lying on a sofa at work and awoken to give an interview with an American journalist, Anne (Elisabeth Moss). She wants Christian to explain his comments about exhibitions. The Square has an episodic structure highlighted with satirical setpieces, none more so than when a man pretending to be an ape gatecrashes the museum’s gala dinner. At first his antics seem amusing to the tuxedoed and lavishly dressed diners, but when he admires one particular female and ultimately pulls her off her chair and drags her by the hair across the floor, it awakens the herd instinct of the men and they savagely beat the intruder. At the Q and A with director Reuben Östlund following the screening of the film, he explained to the audience of his motivations in making the film and his opinion on Sweden today and how the behaviour of its citizens has changed since the 1950s and this is reflected in the film’s protagonist Christian. He thinks of himself as a decent, fairminded person. But his vision of himself is, as with all of us, selective. When he’s feeling good, he gives money to beggars; when he’s concerned and distracted, he ignores them. He’s nice, fair-minded progressive in theory, but when less powerful people that he’s wronged confront him. He gets a quizzical look on his face: “Why me?”. When Christian’s wallet and phone are lifted by a pickpocket in a strange incident on the street, he tracks down, with the help of a junior colleague, the location of the phone to a high-rise apartment building in a less than prosperous neighbourhood. Although he drops an accusatory leaflet in every one of the building’s mail slots, he is so paranoid that they might contact him, that the address he leaves is a nearby 7-Eleven both of these gestures will come back to haunt him. Östlund wrote the screenplay and there is a beautiful scene where the visual announces a hammering attitude of modern art: Christian stands in front of a neon sign illuminating the words YOU ARE NOTHING. Another scene which is one of the funniest, shows an artist named Gijoni (Dominic West) who eccentrically wears pyjamas beneath a smart jacket. He is responsible for neat piles of gravel that are rarely visited and even swept up by an industrial cleaner. Another victim of Östlund’s satire is political correctness. When Gijoni is giving an interview about his work, a man with Tourette Syndrome intervenes with a torrent of abuse hurled at the artist and the museum. Although some audience members take offence, there is an outpouring of support for the foul-mouthed sufferer, not least from the artist himself. This also leads to a brilliant scene in which Anne mimics the sufferer when she sees Christian at a party. And when Christian ponders whether to do something extreme, his co-worker Michael (Christopher Laesse) tells him to ‘ditch the political correctness crap’. The film is flawed in many ways, but gives thought to a lot of questions, not all of which are answered, but the overriding one that reverberates through our mind is our ability to ignore the defenceless and our lack of desire to become involved or engaged comes under the director’s scrutiny. The Square is not a perfect film, but it is an interesting one and warrants sufficient interest in future films from this original filmmaker.