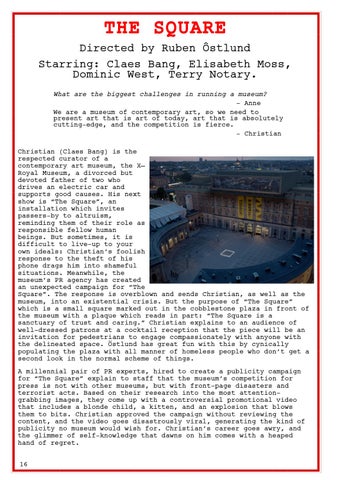 THE SQUARE Directed by Ruben Ôstlund Starring: Claes Bang, Elisabeth Moss, Dominic West, Terry Notary. What are the biggest challenges in running a museum? - Anne We are a museum of contemporary art, so we need to present art that is art of today, art that is absolutely cutting-edge, and the competition is fierce. - Christian Christian (Claes Bang) is the respected curator of a contemporary art museum, the X— Royal Museum, a divorced but devoted father of two who drives an electric car and supports good causes. His next show is “The Square”, an installation which invites passers-by to altruism, reminding them of their role as responsible fellow human beings. But sometimes, it is difficult to live-up to your own ideals: Christian’s foolish response to the theft of his phone drags him into shameful situations. Meanwhile, the museum’s PR agency has created an unexpected campaign for “The Square”. The response is overblown and sends Christian, as well as the museum, into an existential crisis. But the purpose of “The Square” which is a small square marked out in the cobblestone plaza in front of the museum with a plaque which reads in part: “The Square is a sanctuary of trust and caring.” Christian explains to an audience of well-dressed patrons at a cocktail reception that the piece will be an invitation for pedestrians to engage compassionately with anyone with the delineated space. Östlund has great fun with this by cynically populating the plaza with all manner of homeless people who don’t get a second look in the normal scheme of things. A millennial pair of PR experts, hired to create a publicity campaign for “The Square” explain to staff that the museum’s competition for press is not with other museums, but with front-page disasters and terrorist acts. Based on their research into the most attentiongrabbing images, they come up with a controversial promotional video that includes a blonde child, a kitten, and an explosion that blows them to bits. Christian approved the campaign without reviewing the content, and the video goes disastrously viral, generating the kind of publicity no museum would wish for. Christian’s career goes awry, and the glimmer of self-knowledge that dawns on him comes with a heaped hand of regret. 16