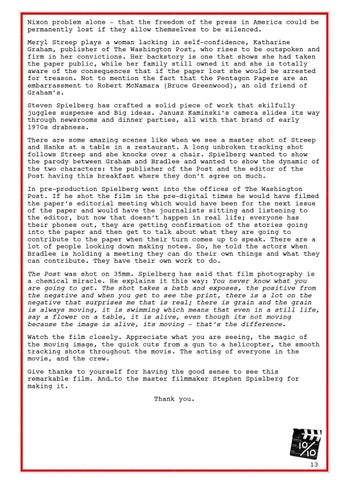 Nixon problem alone – that the freedom of the press in America could be permanently lost if they allow themselves to be silenced.

Meryl Streep plays a woman lacking in self-confidence, Katharine Graham, publisher of The Washington Post, who rises to be outspoken and firm in her convictions. Her backstory is one that shows she had taken the paper public, while her family still owned it and she is totally aware of the consequences that if the paper lost she would be arrested for treason. Not to mention the fact that the Pentagon Papers are an embarrassment to Robert McNamara (Bruce Greenwood), an old friend of Graham’s. Steven Spielberg has crafted a solid piece of work that skilfully juggles suspense and Big ideas. Janusz Kaminski’s camera slides its way through newsrooms and dinner parties, all with that brand of early 1970s drabness.

There are some amazing scenes like when we see a master shot of Streep and Hanks at a table in a restaurant. A long unbroken tracking shot follows Streep and she knocks over a chair. Spielberg wanted to show the parody between Graham and Bradlee and wanted to show the dynamic of the two characters: the publisher of the Post and the editor of the Post having this breakfast where they don’t agree on much. In pre-production Spielberg went into the offices of The Washington Post. If he shot the film in the pre-digital times he would have filmed the paper’s editorial meeting which would have been for the next issue of the paper and would have the journalists sitting and listening to the editor, but now that doesn’t happen in real life; everyone has their phones out, they are getting confirmation of the stories going into the paper and then get to talk about what they are going to contribute to the paper when their turn comes up to speak. There are a lot of people looking down making notes. So, he told the actors when Bradlee is holding a meeting they can do their own things and what they can contribute. They have their own work to do. The Post was shot on 35mm. Spielberg has said that film photography is a chemical miracle. He explains it this way: You never know what you are going to get. The shot takes a bath and exposes, the positive from the negative and when you get to see the print, there is a lot on the negative that surprises me that is real; there is grain and the grain is always moving, it is swimming which means that even in a still life, say a flower on a table, it is alive, even though its not moving because the image is alive, its moving - that’s the difference.

Watch the film closely. Appreciate what you are seeing, the magic of the moving image, the quick cuts from a gun to a helicopter, the smooth tracking shots throughout the movie. The acting of everyone in the movie, and the crew. Give thanks to yourself for having the good sense to see this remarkable film. And…to the master filmmaker Stephen Spielberg for making it. Thank you.