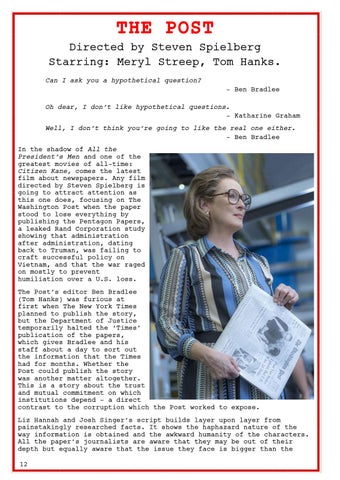 THE POST Directed by Steven Spielberg Starring: Meryl Streep, Tom Hanks. Can I ask you a hypothetical question? - Ben Bradlee Oh dear, I don’t like hypothetical questions. - Katharine Graham Well, I don’t think you’re going to like the real one either. - Ben Bradlee In the shadow of All the President’s Men and one of the greatest movies of all-time: Citizen Kane, comes the latest film about newspapers. Any film directed by Steven Spielberg is going to attract attention as this one does, focusing on The Washington Post when the paper stood to lose everything by publishing the Pentagon Papers, a leaked Rand Corporation study showing that administration after administration, dating back to Truman, was failing to craft successful policy on Vietnam, and that the war raged on mostly to prevent humiliation over a U.S. loss. The Post’s editor Ben Bradlee (Tom Hanks) was furious at first when The New York Times planned to publish the story, but the Department of Justice temporarily halted the ‘Times’ publication of the papers, which gives Bradlee and his staff about a day to sort out the information that the Times had for months. Whether the Post could publish the story was another matter altogether. This is a story about the trust and mutual commitment on which institutions depend – a direct contrast to the corruption which the Post worked to expose. Liz Hannah and Josh Singer’s script builds layer upon layer from painstakingly researched facts. It shows the haphazard nature of the way information is obtained and the awkward humanity of the characters. All the paper’s journalists are aware that they may be out of their depth but equally aware that the issue they face is bigger than the 12