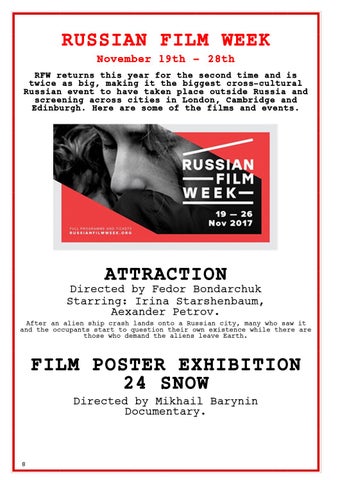 RUSSIAN FILM WEEK November 19th - 28th RFW returns this year for the second time and is twice as big, making it the biggest cross-cultural Russian event to have taken place outside Russia and screening across cities in London, Cambridge and Edinburgh. Here are some of the films and events.

ATTRACTION Directed by Fedor Bondarchuk Starring: Irina Starshenbaum, Aexander Petrov. After an alien ship crash lands onto a Russian city, many who saw it and the occupants start to question their own existence while there are those who demand the aliens leave Earth.