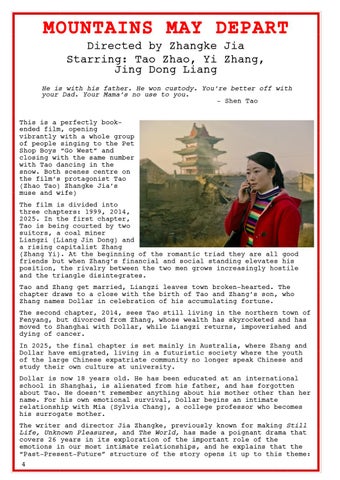 MOUNTAINS MAY DEPART Directed by Zhangke Jia Starring: Tao Zhao, Yi Zhang, Jing Dong Liang He is with his father. He won custody. You’re better off with your Dad. Your Mama’s no use to you. - Shen Tao This is a perfectly bookended film, opening vibrantly with a whole group of people singing to the Pet Shop Boys “Go West” and closing with the same number with Tao dancing in the snow. Both scenes centre on the film’s protagonist Tao (Zhao Tao) Zhangke Jia’s muse and wife) The film is divided into three chapters: 1999, 2014, 2025. In the first chapter, Tao is being courted by two suitors, a coal miner Liangzi (Liang Jin Dong) and a rising capitalist Zhang (Zhang Yi). At the beginning of the romantic triad they are all good friends but when Zhang’s financial and social standing elevates his position, the rivalry between the two men grows increasingly hostile and the triangle disintegrates. Tao and Zhang get married, Liangzi leaves town broken-hearted. The chapter draws to a close with the birth of Tao and Zhang’s son, who Zhang names Dollar in celebration of his accumulating fortune. The second chapter, 2014, sees Tao still living in the northern town of Fenyang, but divorced from Zhang, whose wealth has skyrocketed and has moved to Shanghai with Dollar, while Liangzi returns, impoverished and dying of cancer. In 2025, the final chapter is set mainly in Australia, where Zhang and Dollar have emigrated, living in a futuristic society where the youth of the large Chinese expatriate community no longer speak Chinese and study their own culture at university. Dollar is now 18 years old. He has been educated at an international school in Shanghai, is alienated from his father, and has forgotten about Tao. He doesn’t remember anything about his mother other than her name. For his own emotional survival, Dollar begins an intimate relationship with Mia (Sylvia Chang), a college professor who becomes his surrogate mother. The writer and director Jia Zhangke, previously known for making Still Life, Unknown Pleasures, and The World, has made a poignant drama that covers 26 years in its exploration of the important role of the emotions in our most intimate relationships, and he explains that the “Past-Present-Future” structure of the story opens it up to this theme: 4