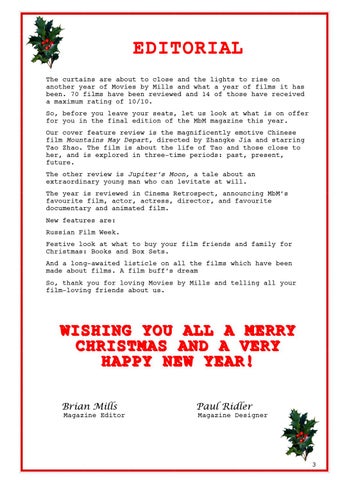 EDITORIAL The curtains are about to close and the lights to rise on another year of Movies by Mills and what a year of films it has been. 70 films have been reviewed and 14 of those have received a maximum rating of 10/10. So, before you leave your seats, let us look at what is on offer for you in the final edition of the MbM magazine this year. Our cover feature review is the magnificently emotive Chinese film Mountains May Depart, directed by Zhangke Jia and starring Tao Zhao. The film is about the life of Tao and those close to her, and is explored in three-time periods: past, present, future. The other review is Jupiter’s Moon, a tale about an extraordinary young man who can levitate at will. The year is reviewed in Cinema Retrospect, announcing MbM’s favourite film, actor, actress, director, and favourite documentary and animated film. New features are: Russian Film Week. Festive look at what to buy your film friends and family for Christmas: Books and Box Sets. And a long-awaited listicle on all the films which have been made about films. A film buff’s dream So, thank you for loving Movies by Mills and telling all your film-loving friends about us.

WISHING YOU ALL A MERRY CHRISTMAS AND A VERY HAPPY NEW YEAR! Brian Mills