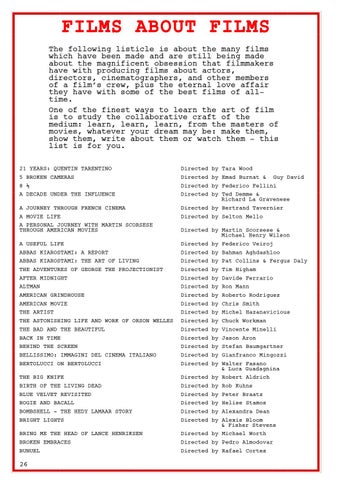 FILMS ABOUT FILMS The following listicle is about the many films which have been made and are still being made about the magnificent obsession that filmmakers have with producing films about actors, directors, cinematographers, and other members of a film’s crew, plus the eternal love affair they have with some of the best films of alltime. One of the finest ways to learn the art of film is to study the collaborative craft of the medium: learn, learn, learn, from the masters of movies, whatever your dream may be: make them, show them, write about them or watch them – this list is for you. 21 YEARS: QUENTIN TARENTINO

A DECADE UNDER THE INFLUENCE

A JOURNEY THROUGH FRENCH CINEMA

A PERSONAL JOURNEY WITH MARTIN SCORSESE THROUGH AMERICAN MOVIES

ABBAS KIAROSTAMI: THE ART OF LIVING

THE ADVENTURES OF GEORGE THE PROJECTIONIST

THE ASTONISHING LIFE AND WORK OF ORSON WELLES

THE BAD AND THE BEAUTIFUL

BIRTH OF THE LIVING DEAD

BRING ME THE HEAD OF LANCE HENRIKSEN

Directed by Michael Worth