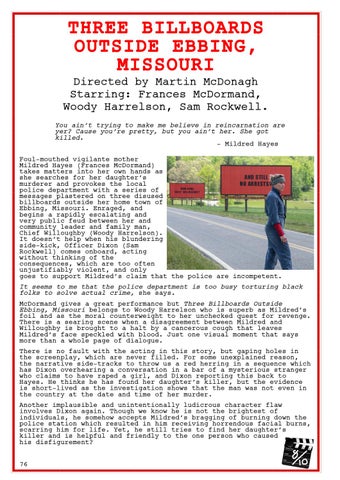 THREE BILLBOARDS OUTSIDE EBBING, MISSOURI Directed by Martin McDonagh Starring: Frances McDormand, Woody Harrelson, Sam Rockwell. You ain’t trying to make me believe in reincarnation are yer? Cause you’re pretty, but you ain’t her. She got killed. - Mildred Hayes Foul-mouthed vigilante mother Mildred Hayes (Frances McDormand) takes matters into her own hands as she searches for her daughter’s murderer and provokes the local police department with a series of messages plastered on three disused billboards outside her home town of Ebbing, Missouri. Enraged, and begins a rapidly escalating and very public feud between her and community leader and family man, Chief Willoughby (Woody Harrelson). It doesn’t help when his blundering side-kick, Officer Dixon (Sam Rockwell) comes onboard, acting without thinking of the consequences, which are too often unjustifiably violent, and only goes to support Mildred’s claim that the police are incompetent. It seems to me that the police department is too busy torturing black folks to solve actual crime, she says. McDormand gives a great performance but Three Billboards Outside Ebbing, Missouri belongs to Woody Harrelson who is superb as Mildred’s foil and as the moral counterweight to her unchecked quest for revenge. There is a searing scene when a disagreement between Mildred and Willoughby is brought to a halt by a cancerous cough that leaves Mildred’s face speckled with blood. Just one visual moment that says more than a whole page of dialogue. There is no fault with the acting in this story, but gaping holes in the screenplay, which are never filled. For some unexplained reason, the narrative side-tracks to throw us a red herring in a sequence which has Dixon overhearing a conversation in a bar of a mysterious stranger who claims to have raped a girl, and Dixon reporting this back to Hayes. He thinks he has found her daughter’s killer, but the evidence is short-lived as the investigation shows that the man was not even in the country at the date and time of her murder. Another implausible and unintentionally ludicrous character flaw involves Dixon again. Though we know he is not the brightest of individuals, he somehow accepts Mildred’s bragging of burning down the police station which resulted in him receiving horrendous facial burns, scarring him for life. Yet, he still tries to find her daughter’s killer and is helpful and friendly to the one person who caused his disfigurement? 76