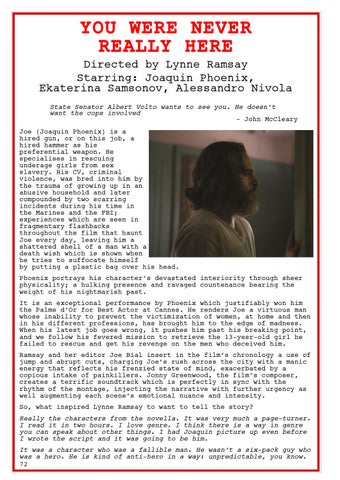 YOU WERE NEVER REALLY HERE Directed by Lynne Ramsay Starring: Joaquin Phoenix, Ekaterina Samsonov, Alessandro Nivola State Senator Albert Volto wants to see you. He doesn’t want the cops involved - John McCleary Joe (Joaquin Phoenix) is a hired gun, or on this job, a hired hammer as his preferential weapon. He specialises in rescuing underage girls from sex slavery. His CV, criminal violence, was bred into him by the trauma of growing up in an abusive household and later compounded by two scarring incidents during his time in the Marines and the FBI; experiences which are seen in fragmentary flashbacks throughout the film that haunt Joe every day, leaving him a shattered shell of a man with a death wish which is shown when he tries to suffocate himself by putting a plastic bag over his head. Phoenix portrays his character’s devastated interiority through sheer physicality; a hulking presence and ravaged countenance bearing the weight of his nightmarish past. It is an exceptional performance by Phoenix which justifiably won him the Palme d’Or for Best Actor at Cannes. He renders Joe a virtuous man whose inability to prevent the victimization of women, at home and then in his different professions, has brought him to the edge of madness. When his latest job goes wrong, it pushes him past his breaking point, and we follow his fevered mission to retrieve the 13-yesr-old girl he failed to rescue and get his revenge on the men who deceived him. Ramsay and her editor Joe Bial insert in the film’s chronology a use of jump and abrupt cuts, charging Joe’s rush across the city with a manic energy that reflects his frenzied state of mind, exacerbated by a copious intake of painkillers. Jonny Greenwood, the film’s composer, creates a terrific soundtrack which is perfectly in sync with the rhythm of the montage, injecting the narrative with further urgency as well augmenting each scene’s emotional nuance and intensity. So, what inspired Lynne Ramsay to want to tell the story? Really the characters from the novella. It was very much a page-turner. I read it in two hours. I love genre. I think there is a way in genre you can speak about other things. I had Joaquin picture up even before I wrote the script and it was going to be him. It was a character who was a fallible man. He wasn’t a six-pack guy who was a hero. He is kind of anti-hero in a way: unpredictable, you know. 72