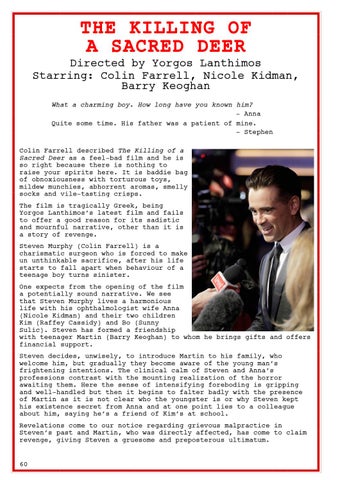 THE KILLING OF A SACRED DEER Directed by Yorgos Lanthimos Starring: Colin Farrell, Nicole Kidman, Barry Keoghan What a charming boy. How long have you known him? - Anna Quite some time. His father was a patient of mine. - Stephen Colin Farrell described The Killing of a Sacred Deer as a feel-bad film and he is so right because there is nothing to raise your spirits here. It is baddie bag of obnoxiousness with torturous toys, mildew munchies, abhorrent aromas, smelly socks and vile-tasting crisps. The film is tragically Greek, being Yorgos Lanthimos’s latest film and fails to offer a good reason for its sadistic and mournful narrative, other than it is a story of revenge. Steven Murphy (Colin Farrell) is a charismatic surgeon who is forced to make un unthinkable sacrifice, after his life starts to fall apart when behaviour of a teenage boy turns sinister. One expects from the opening of the film a potentially sound narrative. We see that Steven Murphy lives a harmonious life with his ophthalmologist wife Anna (Nicole Kidman) and their two children Kim (Raffey Cassidy) and Bo (Sunny Sulic). Steven has formed a friendship with teenager Martin (Barry Keoghan) to whom he brings gifts and offers financial support. Steven decides, unwisely, to introduce Martin to his family, who welcome him, but gradually they become aware of the young man’s frightening intentions. The clinical calm of Steven and Anna’s professions contrast with the mounting realization of the horror awaiting them. Here the sense of intensifying foreboding is gripping and well-handled but then it begins to falter badly with the presence of Martin as it is not clear who the youngster is or why Steven kept his existence secret from Anna and at one point lies to a colleague about him, saying he’s a friend of Kim’s at school. Revelations come to our notice regarding grievous malpractice in Steven’s past and Martin, who was directly affected, has come to claim revenge, giving Steven a gruesome and preposterous ultimatum.