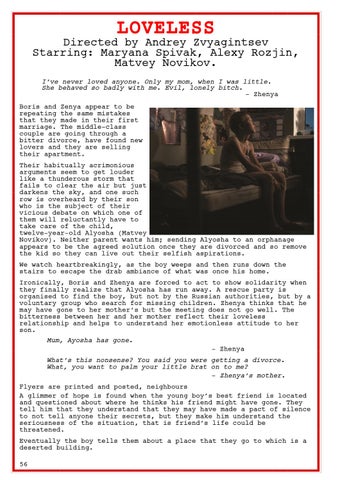 Directed by Andrey Zvyagintsev Starring: Maryana Spivak, Alexy Rozjin, Matvey Novikov. I’ve never loved anyone. Only my mom, when I was little. She behaved so badly with me. Evil, lonely bitch. - Zhenya Boris and Zenya appear to be repeating the same mistakes that they made in their first marriage. The middle-class couple are going through a bitter divorce, have found new lovers and they are selling their apartment. Their habitually acrimonious arguments seem to get louder like a thunderous storm that fails to clear the air but just darkens the sky, and one such row is overheard by their son who is the subject of their vicious debate on which one of them will reluctantly have to take care of the child, twelve-year-old Alyosha (Matvey Novikov). Neither parent wants him; sending Alyosha to an orphanage appears to be the agreed solution once they are divorced and so remove the kid so they can live out their selfish aspirations. We watch heartbreakingly, as the boy weeps and then runs down the stairs to escape the drab ambiance of what was once his home. Ironically, Boris and Zhenya are forced to act to show solidarity when they finally realize that Alyosha has run away. A rescue party is organised to find the boy, but not by the Russian authorities, but by a voluntary group who search for missing children. Zhenya thinks that he may have gone to her mother’s but the meeting does not go well. The bitterness between her and her mother reflect their loveless relationship and helps to understand her emotionless attitude to her son. Mum, Ayosha has gone. - Zhenya What’s this nonsense? You said you were getting a divorce. What, you want to palm your little brat on to me? - Zhenya’s mother. Flyers are printed and posted, neighbours A glimmer of hope is found when the young boy’s best friend is located and questioned about where he thinks his friend might have gone. They tell him that they understand that they may have made a pact of silence to not tell anyone their secrets, but they make him understand the seriousness of the situation, that is friend’s life could be threatened.

Eventually the boy tells them about a place that they go to which is a deserted building. 56