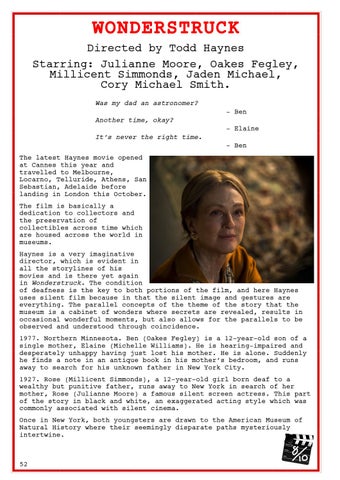 WONDERSTRUCK Directed by Todd Haynes Starring: Julianne Moore, Oakes Fegley, Millicent Simmonds, Jaden Michael, Cory Michael Smith. Was my dad an astronomer? - Ben Another time, okay? - Elaine Itâ&#x20AC;&#x2122;s never the right time. - Ben The latest Haynes movie opened at Cannes this year and travelled to Melbourne, Locarno, Telluride, Athens, San Sebastian, Adelaide before landing in London this October. The film is basically a dedication to collectors and the preservation of collectibles across time which are housed across the world in museums. Haynes is a very imaginative director, which is evident in all the storylines of his movies and is there yet again in Wonderstruck. The condition of deafness is the key to both portions of the film, and here Haynes uses silent film because in that the silent image and gestures are everything. The parallel concepts of the theme of the story that the museum is a cabinet of wonders where secrets are revealed, results in occasional wonderful moments, but also allows for the parallels to be observed and understood through coincidence.

1977. Northern Minnesota. Ben (Oakes Fegley) is a 12-year-old son of a single mother, Elaine (Michelle Williams). He is hearing-impaired and desperately unhappy having just lost his mother. He is alone. Suddenly he finds a note in an antique book in his motherâ&#x20AC;&#x2122;s bedroom, and runs away to search for his unknown father in New York City. 1927. Rose (Millicent Simmonds), a 12-year-old girl born deaf to a wealthy but punitive father, runs away to New York in search of her mother, Rose (Julianne Moore) a famous silent screen actress. This part of the story in black and white, an exaggerated acting style which was commonly associated with silent cinema. Once in New York, both youngsters are drawn to the American Museum of Natural History where their seemingly disparate paths mysteriously intertwine.