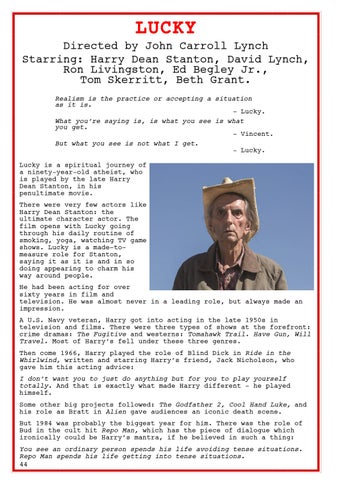 LUCKY Directed by John Carroll Lynch Starring: Harry Dean Stanton, David Lynch, Ron Livingston, Ed Begley Jr., Tom Skerritt, Beth Grant. Realism is the practice or accepting a situation as it is. - Lucky. What you’re saying is, is what you see is what you get. - Vincent. But what you see is not what I get. - Lucky. Lucky is a spiritual journey of a ninety-year-old atheist, who is played by the late Harry Dean Stanton, in his penultimate movie. There were very few actors like Harry Dean Stanton: the ultimate character actor. The film opens with Lucky going through his daily routine of smoking, yoga, watching TV game shows. Lucky is a made-tomeasure role for Stanton, saying it as it is and in so doing appearing to charm his way around people. He had been acting for over sixty years in film and television. He was almost never in a leading role, but always made an impression. A U.S. Navy veteran, Harry got into acting in the late 1950s in television and films. There were three types of shows at the forefront: crime dramas: The Fugitive and westerns: Tomahawk Trail. Have Gun, Will Travel. Most of Harry’s fell under these three genres. Then come 1966, Harry played the role of Blind Dick in Ride in the Whirlwind, written and starring Harry’s friend, Jack Nicholson, who gave him this acting advice: I don’t want you to just do anything but for you to play yourself totally. And that is exactly what made Harry different – he played himself. Some other big projects followed: The Godfather 2, Cool Hand Luke, and his role as Bratt in Alien gave audiences an iconic death scene. But 1984 was probably the biggest year for him. There was the role of Bud in the cult hit Repo Man, which has the piece of dialogue which ironically could be Harry’s mantra, if he believed in such a thing: You see an ordinary person spends his life avoiding tense situations. Repo Man spends his life getting into tense situations. 44