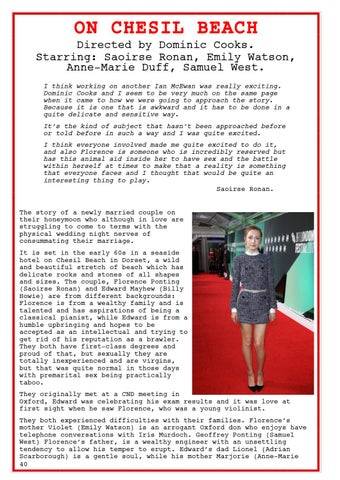 ON CHESIL BEACH Directed by Dominic Cooks. Starring: Saoirse Ronan, Emily Watson, Anne-Marie Duff, Samuel West. I think working on another Ian McEwan was really exciting. Dominic Cooks and I seem to be very much on the same page when it came to how we were going to approach the story. Because it is one that is awkward and it has to be done in a quite delicate and sensitive way. It’s the kind of subject that hasn’t been approached before or told before in such a way and I was quite excited. I think everyone involved made me quite excited to do it, and also Florence is someone who is incredibly reserved but has this animal aid inside her to have sex and the battle within herself at times to make that a reality is something that everyone faces and I thought that would be quite an interesting thing to play. Saoirse Ronan.

The story of a newly married couple on their honeymoon who although in love are struggling to come to terms with the physical wedding night nerves of consummating their marriage. It is set in the early 60s in a seaside hotel on Chesil Beach in Dorset, a wild and beautiful stretch of beach which has delicate rocks and stones of all shapes and sizes. The couple, Florence Ponting (Saoirse Ronan) and Edward Mayhew (Billy Howie) are from different backgrounds: Florence is from a wealthy family and is talented and has aspirations of being a classical pianist, while Edward is from a humble upbringing and hopes to be accepted as an intellectual and trying to get rid of his reputation as a brawler. They both have first-class degrees and proud of that, but sexually they are totally inexperienced and are virgins, but that was quite normal in those days with premarital sex being practically taboo. They originally met at a CND meeting in Oxford, Edward was celebrating his exam results and it was love at first sight when he saw Florence, who was a young violinist. They both experienced difficulties with their families. Florence’s mother Violet (Emily Watson) is an arrogant Oxford don who enjoys have telephone conversations with Iris Murdoch. Geoffrey Ponting (Samuel West) Florence’s father, is a wealthy engineer with an unsettling tendency to allow his temper to erupt. Edward’s dad Lionel (Adrian Scarborough) is a gentle soul, while his mother Marjorie (Anne-Marie 40