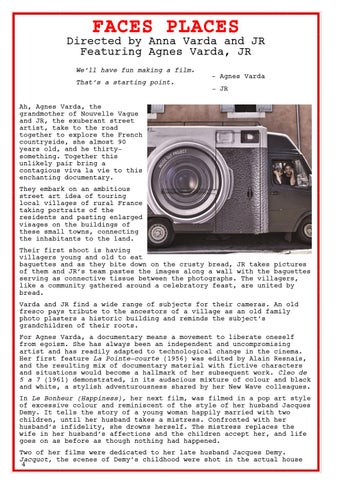 That’s a starting point. - JR Ah, Agnes Varda, the grandmother of Nouvelle Vague and JR, the exuberant street artist, take to the road together to explore the French countryside, she almost 90 years old, and he thirtysomething. Together this unlikely pair bring a contagious viva la vie to this enchanting documentary. They embark on an ambitious street art idea of touring local villages of rural France taking portraits of the residents and pasting enlarged visages on the buildings of these small towns, connecting the inhabitants to the land. Their first shoot is having villagers young and old to eat baguettes and as they bite down on the crusty bread, JR takes pictures of them and JR’s team pastes the images along a wall with the baguettes serving as connective tissue between the photographs. The villagers, like a community gathered around a celebratory feast, are united by bread. Varda and JR find a wide range of subjects for their cameras. An old fresco pays tribute to the ancestors of a village as an old family photo plasters a historic building and reminds the subject’s grandchildren of their roots.

For Agnes Varda, a documentary means a movement to liberate oneself from egoism. She has always been an independent and uncompromising artist and has readily adapted to technological change in the cinema. Her first feature La Pointe-courte (1956) was edited by Alain Resnais, and the resulting mix of documentary material with fictive characters and situations would become a hallmark of her subsequent work. Cleo de 5 a 7 (1961) demonstrated, in its audacious mixture of colour and black and white, a stylish adventurousness shared by her New Wave colleagues. In Le Bonheur (Happiness), her next film, was filmed in a pop art style of excessive colour and reminiscent of the style of her husband Jacques Demy. It tells the story of a young woman happily married with two children, until her husband takes a mistress. Confronted with her husband’s infidelity, she drowns herself. The mistress replaces the wife in her husband’s affections and the children accept her, and life goes on as before as though nothing had happened. Two of her films were dedicated to her late husband Jacques Demy. Jacquot, the scenes of Demy’s childhood were shot in the actual house 4