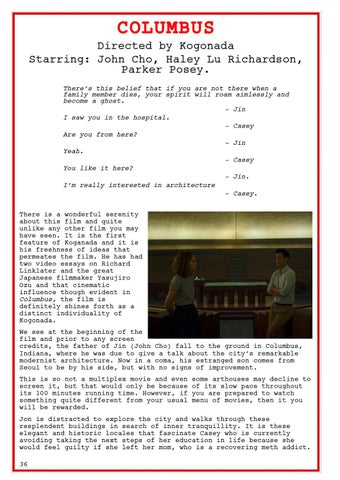 COLUMBUS Directed by Kogonada Starring: John Cho, Haley Lu Richardson, Parker Posey. There’s this belief that if you are not there when a family member dies, your spirit will roam aimlessly and become a ghost. – Jin I saw you in the hospital. - Casey Are you from here? - Jin Yeah. - Casey You like it here? - Jin. I’m really interested in architecture - Casey. There is a wonderful serenity about this film and quite unlike any other film you may have seen. It is the first feature of Koganada and it is his freshness of ideas that permeates the film. He has had two video essays on Richard Linklater and the great Japanese filmmaker Yasujiro Ozu and that cinematic influence though evident in Columbus, the film is definitely shines forth as a distinct individuality of Kogonada. We see at the beginning of the film and prior to any screen credits, the father of Jin (John Cho) fall to the ground in Columbus, Indiana, where he was due to give a talk about the city’s remarkable modernist architecture. Now in a coma, his estranged son comes from Seoul to be by his side, but with no signs of improvement. This is so not a multiplex movie and even screen it, but that would only be because its 100 minutes running time. However, if something quite different from your usual will be rewarded.

some arthouses may decline to of its slow pace throughout you are prepared to watch menu of movies, then it you

Jon is distracted to explore the city and walks through these resplendent buildings in search of inner tranquillity. It is these elegant and historic locales that fascinate Casey who is currently avoiding taking the next steps of her education in life because she would feel guilty if she left her mom, who is a recovering meth addict. 36