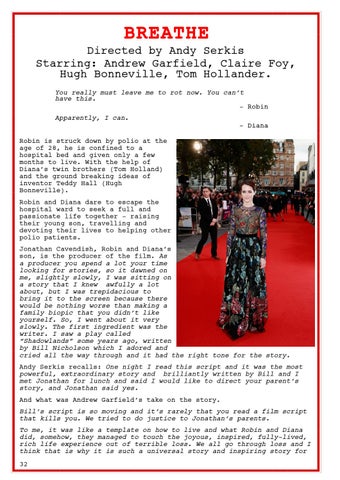 BREATHE Directed by Andy Serkis Starring: Andrew Garfield, Claire Foy, Hugh Bonneville, Tom Hollander. You really must leave me to rot now. You can’t have this. - Robin Apparently, I can. - Diana

Robin is struck down by polio at the age of 28, he is confined to a hospital bed and given only a few months to live. With the help of Diana’s twin brothers (Tom Holland) and the ground breaking ideas of inventor Teddy Hall (Hugh Bonneville). Robin and Diana dare to escape the hospital ward to seek a full and passionate life together – raising their young son, travelling and devoting their lives to helping other polio patients. Jonathan Cavendish, Robin and Diana’s son, is the producer of the film. As a producer you spend a lot your time looking for stories, so it dawned on me, slightly slowly, I was sitting on a story that I knew awfully a lot about, but I was trepidacious to bring it to the screen because there would be nothing worse than making a family biopic that you didn’t like yourself. So, I went about it very slowly. The first ingredient was the writer. I saw a play called “Shadowlands” some years ago, written by Bill Nicholson which I adored and cried all the way through and it had the right tone for the story. Andy Serkis recalls: One night I read this script and it was the most powerful, extraordinary story and brilliantly written by Bill and I met Jonathan for lunch and said I would like to direct your parent’s story, and Jonathan said yes. And what was Andrew Garfield’s take on the story. Bill’s script is so moving and it’s rarely that you read a film script that kills you. We tried to do justice to Jonathan’s parents. To me, it was like a template on how to live and what Robin and Diana did, somehow, they managed to touch the joyous, inspired, fully-lived, rich life experience out of terrible loss. We all go through loss and I think that is why it is such a universal story and inspiring story for 32