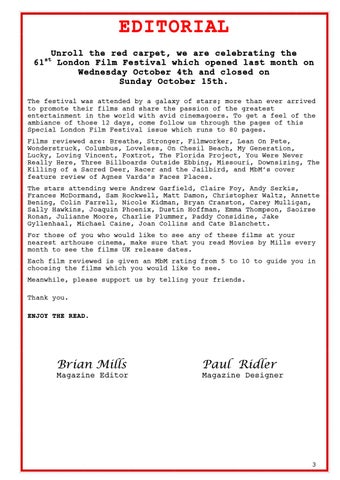 The festival was attended by a galaxy of stars; more than ever arrived to promote their films and share the passion of the greatest entertainment in the world with avid cinemagoers. To get a feel of the ambiance of those 12 days, come follow us through the pages of this Special London Film Festival issue which runs to 80 pages.

Films reviewed are: Breathe, Stronger, Filmworker, Lean On Pete, Wonderstruck, Columbus, Loveless, On Chesil Beach, My Generation, Lucky, Loving Vincent, Foxtrot, The Florida Project, You Were Never Really Here, Three Billboards Outside Ebbing, Missouri, Downsizing, The Killing of a Sacred Deer, Racer and the Jailbird, and MbMâ&#x20AC;&#x2122;s cover feature review of Agnes Vardaâ&#x20AC;&#x2122;s Faces Places. The stars attending were Andrew Garfield, Claire Foy, Andy Serkis, Frances McDormand, Sam Rockwell, Matt Damon, Christopher Waltz, Annette Bening, Colin Farrell, Nicole Kidman, Bryan Cranston, Carey Mulligan, Sally Hawkins, Joaquin Phoenix, Dustin Hoffman, Emma Thompson, Saoirse Ronan, Julianne Moore, Charlie Plummer, Paddy Considine, Jake Gyllenhaal, Michael Caine, Joan Collins and Cate Blanchett. For those of you who would like to see any of these films at your nearest arthouse cinema, make sure that you read Movies by Mills every month to see the films UK release dates. Each film reviewed is given an MbM rating from 5 to 10 to guide you in choosing the films which you would like to see. Meanwhile, please support us by telling your friends. Thank you. ENJOY THE READ.