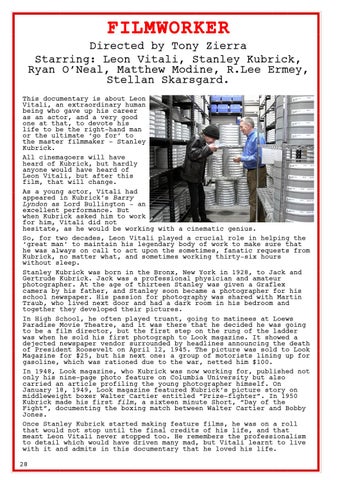 FILMWORKER Directed by Tony Zierra Starring: Leon Vitali, Stanley Kubrick, Ryan O’Neal, Matthew Modine, R.Lee Ermey, Stellan Skarsgard. This documentary is about Leon Vitali, an extraordinary human being who gave up his career as an actor, and a very good one at that, to devote his life to be the right-hand man or the ultimate ‘go for’ to the master filmmaker – Stanley Kubrick. All cinemagoers will have heard of Kubrick, but hardly anyone would have heard of Leon Vitali, but after this film, that will change. As a young actor, Vitali had appeared in Kubrick’s Barry Lyndon as Lord Bullington – an excellent performance. But when Kubrick asked him to work for him, Vitali did not hesitate, as he would be working with a cinematic genius. So, for two decades, Leon Vitali played a crucial role in helping the ‘great man’ to maintain his legendary body of work to make sure that he was always on call to act upon the sometimes, fanatic requests from Kubrick, no matter what, and sometimes working thirty-six hours without sleep. Stanley Kubrick was born in the Bronx, New York in 1928, to Jack and Gertrude Kubrick. Jack was a professional physician and amateur photographer. At the age of thirteen Stanley was given a Graflex camera by his father, and Stanley soon became a photographer for his school newspaper. His passion for photography was shared with Martin Traub, who lived next door and had a dark room in his bedroom and together they developed their pictures. In High School, he often played truant, going to matinees at Loews Paradise Movie Theatre, and it was there that he decided he was going to be a film director, but the first step on the rung of the ladder was when he sold his first photograph to Look magazine. It showed a dejected newspaper vendor surrounded by headlines announcing the death of President Roosevelt on April 12, 1945. The picture was sold to Look Magazine for $25, but his next one: a group of motorists lining up for gasoline, which was rationed due to the war, netted him $100. In 1948, Look magazine, who Kubrick was now working for, published not only his nine-page photo feature on Columbia University but also carried an article profiling the young photographer himself. On January 18, 1949, Look magazine featured Kubrick’s picture story on middleweight boxer Walter Cartier entitled “Prize-fighter”. In 1950 Kubrick made his first film, a sixteen minute Short, “Day of the Fight”, documenting the boxing match between Walter Cartier and Bobby Jones. Once Stanley Kubrick started making feature films, he was on a roll that would not stop until the final credits of his life, and that meant Leon Vitali never stopped too. He remembers the professionalism to detail which would have driven many mad, but Vitali learnt to live with it and admits in this documentary that he loved his life. 28