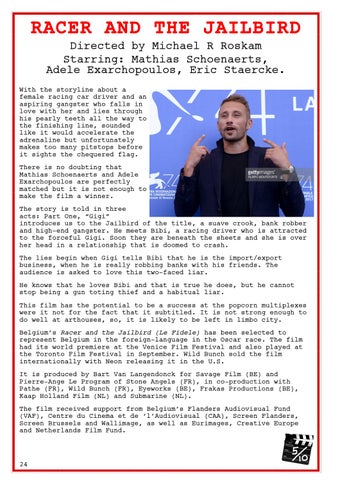 RACER AND THE JAILBIRD Directed by Michael R Roskam Starring: Mathias Schoenaerts, Adele Exarchopoulos, Eric Staercke. With the storyline about a female racing car driver and an aspiring gangster who falls in love with her and lies through his pearly teeth all the way to the finishing line, sounded like it would accelerate the adrenaline but unfortunately makes too many pitstops before it sights the chequered flag. There is no doubting that Mathias Schoenaerts and Adele Exarchopoulos are perfectly matched but it is not enough to make the film a winner. The story is told in three acts: Part One, “Gigi” introduces us to the Jailbird of the title, a suave crook, bank robber and high-end gangster. He meets Bibi, a racing driver who is attracted to the forceful Gigi. Soon they are beneath the sheets and she is over her head in a relationship that is doomed to crash. The lies begin when Gigi tells Bibi that he is the import/export business, when he is really robbing banks with his friends. The audience is asked to love this two-faced liar. He knows that he loves Bibi and that is true he does, but he cannot stop being a gun toting thief and a habitual liar. This film has the potential to be a success at the popcorn multiplexes were it not for the fact that it subtitled. It is not strong enough to do well at arthouses, so, it is likely to be left in limbo city. Belgium’s Racer and the Jailbird (Le Fidele) has been selected to represent Belgium in the foreign-language in the Oscar race. The film had its world premiere at the Venice Film Festival and also played at the Toronto Film Festival in September. Wild Bunch sold the film internationally with Neon releasing it in the U.S. It is produced by Bart Pierre-Ange Le Program Pathe (FR), Wild Bunch Kaap Holland Film (NL)

Van Langendonck for Savage Film (BE) and of Stone Angels (FR), in co-production with (FR), Eyeworks (BE), Frakas Productions (BE), and Submarine (NL).