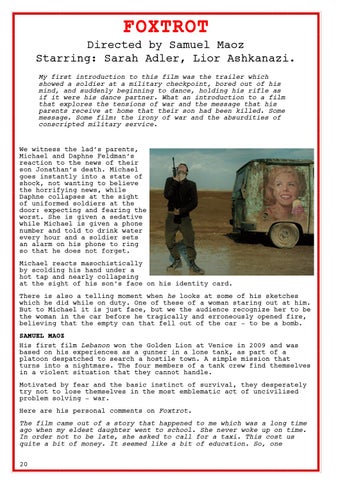 FOXTROT Directed by Samuel Maoz Starring: Sarah Adler, Lior Ashkanazi. My first introduction to this film was the trailer which showed a soldier at a military checkpoint, bored out of his mind, and suddenly beginning to dance, holding his rifle as if it were his dance partner. What an introduction to a film that explores the tensions of war and the message that his parents receive at home that their son had been killed. Some message. Some film: the irony of war and the absurdities of conscripted military service.

We witness the lad’s parents, Michael and Daphne Feldman’s reaction to the news of their son Jonathan’s death. Michael goes instantly into a state of shock, not wanting to believe the horrifying news, while Daphne collapses at the sight of uniformed soldiers at the door: expecting and fearing the worst. She is given a sedative while Michael is given a phone number and told to drink water every hour and a soldier sets an alarm on his phone to ring so that he does not forget. Michael reacts masochistically by scolding his hand under a hot tap and nearly collapsing at the sight of his son’s face on his identity card. There is also a telling moment when he looks at some of his sketches which he did while on duty. One of these of a woman staring out at him. But to Michael it is just face, but we the audience recognize her to be the woman in the car before he tragically and erroneously opened fire, believing that the empty can that fell out of the car – to be a bomb. SAMUEL MAOZ His first film Lebanon won the Golden Lion at Venice in 2009 and was based on his experiences as a gunner in a lone tank, as part of a platoon despatched to search a hostile town. A simple mission that turns into a nightmare. The four members of a tank crew find themselves in a violent situation that they cannot handle. Motivated by fear and the basic instinct of survival, they desperately try not to lose themselves in the most emblematic act of uncivilised problem solving – war. Here are his personal comments on Foxtrot. The film came out of a story that happened to me which was a long time ago when my eldest daughter went to school. She never woke up on time. In order not to be late, she asked to call for a taxi. This cost us quite a bit of money. It seemed like a bit of education. So, one 20