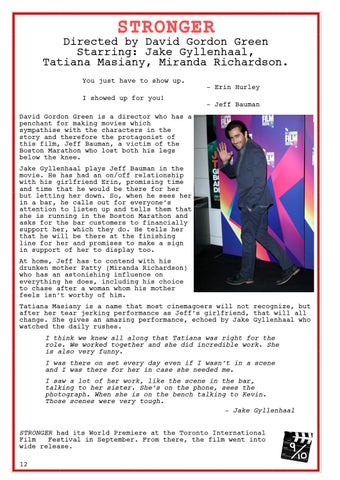 Directed by David Gordon Green Starring: Jake Gyllenhaal, Tatiana Masiany, Miranda Richardson. You just have to show up. - Erin Hurley I showed up for you! - Jeff Bauman David Gordon Green is a director who has a penchant for making movies which sympathise with the characters in the story and therefore the protagonist of this film, Jeff Bauman, a victim of the Boston Marathon who lost both his legs below the knee. Jake Gyllenhaal plays Jeff Bauman in the movie. He has had an on/off relationship with his girlfriend Erin, promising time and time that he would be there for her but letting her down. So, when he sees her in a bar, he calls out for everyone’s attention to listen up and tells them that she is running in the Boston Marathon and asks for the bar customers to financially support her, which they do. He tells her that he will be there at the finishing line for her and promises to make a sign in support of her to display too. At home, Jeff has to contend with his drunken mother Patty (Miranda Richardson) who has an astonishing influence on everything he does, including his choice to chase after a woman whom his mother feels isn’t worthy of him. Tatiana Masiany is a name that most cinemagoers will not recognize, but after her tear jerking performance as Jeff’s girlfriend, that will all change. She gives an amazing performance, echoed by Jake Gyllenhaal who watched the daily rushes.

I think we knew all along that Tatiana was right for the role. We worked together and she did incredible work. She is also very funny. I was there on set every day even if I wasn’t in a scene and I was there for her in case she needed me. I saw a lot of her work, like the scene in the bar, talking to her sister. She’s on the phone, sees the photograph. When she is on the bench talking to Kevin. Those scenes were very tough. - Jake Gyllenhaal STRONGER had its World Premiere at the Toronto International Film Festival in September. From there, the film went into wide release. 12