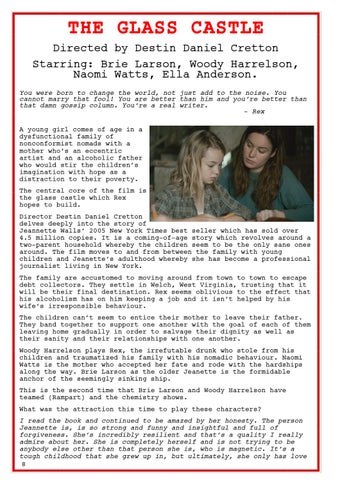 THE GLASS CASTLE Directed by Destin Daniel Cretton Starring: Brie Larson, Woody Harrelson, Naomi Watts, Ella Anderson. You were born to change the world, not just add to the noise. You cannot marry that fool! You are better than him and you’re better than that damn gossip column. You’re a real writer. - Rex A young girl comes of age in a dysfunctional family of nonconformist nomads with a mother who’s an eccentric artist and an alcoholic father who would stir the children’s imagination with hope as a distraction to their poverty. The central core of the film is the glass castle which Rex hopes to build. Director Destin Daniel Cretton delves deeply into the story of Jeannette Walls’ 2005 New York Times best seller which has sold over 4.5 million copies. It is a coming-of-age story which revolves around a two-parent household whereby the children seem to be the only sane ones around. The film moves to and from between the family with young children and Jeanette’s adulthood whereby she has become a professional journalist living in New York. The family are accustomed to moving around from town to town to escape debt collectors. They settle in Welch, West Virginia, trusting that it will be their final destination. Rex seems oblivious to the effect that his alcoholism has on him keeping a job and it isn’t helped by his wife’s irresponsible behaviour. The children can’t seem to entice their mother to leave their father. They band together to support one another with the goal of each of them leaving home gradually in order to salvage their dignity as well as their sanity and their relationships with one another. Woody Harrelson plays Rex, the irrefutable drunk who stole from his children and traumatized his family with his nomadic behaviour. Naomi Watts is the mother who accepted her fate and rode with the hardships along the way. Brie Larson as the older Jeanette is the formidable anchor of the seemingly sinking ship. This is the second time that Brie Larson and Woody Harrelson have teamed (Rampart) and the chemistry shows. What was the attraction this time to play these characters? I read the book and continued to be amazed by her honesty. The person Jeannette is, is so strong and funny and insightful and full of forgiveness. She’s incredibly resilient and that’s a quality I really admire about her. She is completely herself and is not trying to be anybody else other than that person she is, who is magnetic. It’s a tough childhood that she grew up in, but ultimately, she only has love 8