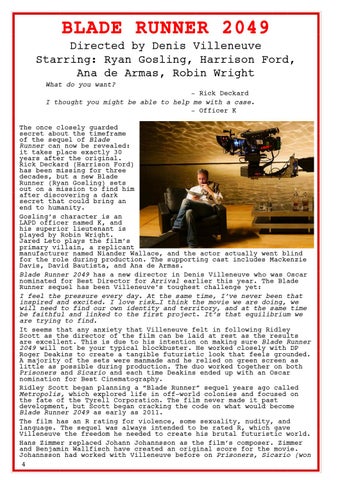 BLADE RUNNER 2049 Directed by Denis Villeneuve Starring: Ryan Gosling, Harrison Ford, Ana de Armas, Robin Wright What do you want? - Rick Deckard I thought you might be able to help me with a case. - Officer K The once closely guarded secret about the timeframe of the sequel of Blade Runner can now be revealed: it takes place exactly 30 years after the original. Rick Deckard (Harrison Ford) has been missing for three decades, but a new Blade Runner (Ryan Gosling) sets out on a mission to find him after discovering a dark secret that could bring an end to humanity. Gosling’s character is an LAPD officer named K, and his superior lieutenant is played by Robin Wright. Jared Leto plays the film’s primary villain, a replicant manufacturer named Niander Wallace, and the actor actually went blind for the role during production. The supporting cast includes Mackenzie Davis, David Bautista, and Ana de Armas. Blade Runner 2049 has a new director in Denis Villeneuve who was Oscar nominated for Best Director for Arrival earlier this year. The Blade Runner sequel has been Villeneuve’s toughest challenge yet: I feel the pressure every day. At the same time, I’ve never been that inspired and excited. I love risk…I think the movie we are doing, we will need to find our own identity and territory, and at the same time be faithful and linked to the first project. It’s that equilibrium we are trying to find. It seems that any anxiety that Villeneuve felt in following Ridley Scott as the director of the film can be laid at rest as the results are excellent. This is due to his intention on making sure Blade Runner 2049 will not be your typical blockbuster. He worked closely with DP Roger Deakins to create a tangible futuristic look that feels grounded. A majority of the sets were manmade and he relied on green screen as little as possible during production. The duo worked together on both Prisoners and Sicario and each time Deakins ended up with an Oscar nomination for Best Cinematography. Ridley Scott began planning a “Blade Runner” sequel years ago called Metropolis, which explored life in off-world colonies and focused on the fate of the Tyrell Corporation. The film never made it past development, but Scott began cracking the code on what would become Blade Runner 2049 as early as 2011. The film has an R rating for violence, some sexuality, nudity, and language. The sequel was always intended to be rated R, which gave Villeneuve the freedom he needed to create his brutal futuristic world. Hans Zimmer replaced Johann Johannsson as the film’s composer. Zimmer and Benjamin Wallfisch have created an original score for the movie. Johannsson had worked with Villeneuve before on Prisoners, Sicario (won 4