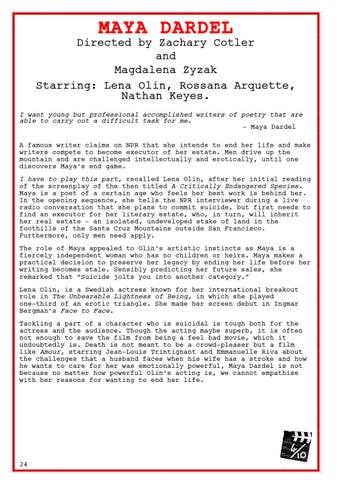 MAYA DARDEL Directed by Zachary Cotler and Magdalena Zyzak Starring: Lena Olin, Rossana Arquette, Nathan Keyes. I want young but professional accomplished writers of poetry that are able to carry out a difficult task for me. - Maya Dardel A famous writer claims on NPR that she intends to end her life and make writers compete to become executor of her estate. Men drive up the mountain and are challenged intellectually and erotically, until one discovers Maya’s end game. I have to play this part, recalled Lena Olin, after her initial reading of the screenplay of the then titled A Critically Endangered Species. Maya is a poet of a certain age who feels her best work is behind her. In the opening sequence, she tells the NPR interviewer during a live radio conversation that she plans to commit suicide, but first needs to find an executor for her literary estate, who, in turn, will inherit her real estate – an isolated, undeveloped stake of land in the foothills of the Santa Cruz Mountains outside San Francisco. Furthermore, only men need apply. The role of Maya appealed to Olin’s artistic instincts as Maya is a fiercely independent woman who has no children or heirs. Maya makes a practical decision to preserve her legacy by ending her life before her writing becomes stale. Sensibly predicting her future sales, she remarked that “Suicide jolts you into another category.” Lena Olin, is a Swedish actress known for her international breakout role in The Unbearable Lightness of Being, in which she played one-third of an erotic triangle. She made her screen debut in Ingmar Bergman’s Face to Face. Tackling a part of a character who is suicidal is tough both for the actress and the audience. Though the acting maybe superb, it is often not enough to save the film from being a feel bad movie, which it undoubtedly is. Death is not meant to be a crowd-pleaser but a film like Amour, starring Jean-Louis Trintignant and Emmanuelle Riva about the challenges that a husband faces when his wife has a stroke and how he wants to care for her was emotionally powerful, Maya Dardel is not because no matter how powerful Olin’s acting is, we cannot empathise with her reasons for wanting to end her life.