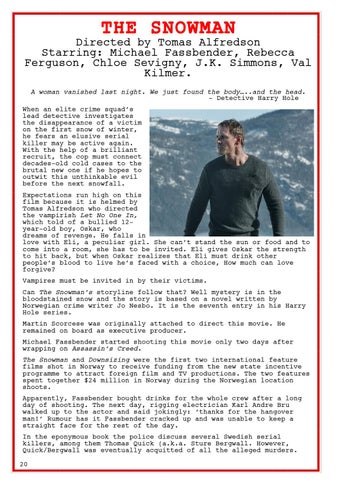 Directed by Tomas Alfredson Starring: Michael Fassbender, Rebecca Ferguson, Chloe Sevigny, J.K. Simmons, Val Kilmer. A woman vanished last night. We just found the body…..and the head. - Detective Harry Hole When an elite crime squad’s lead detective investigates the disappearance of a victim on the first snow of winter, he fears an elusive serial killer may be active again. With the help of a brilliant recruit, the cop must connect decades-old cold cases to the brutal new one if he hopes to outwit this unthinkable evil before the next snowfall. Expectations run high on this film because it is helmed by Tomas Alfredson who directed the vampirish Let No One In, which told of a bullied 12year-old boy, Oskar, who dreams of revenge. He falls in love with Eli, a peculiar girl. She can’t stand the sun or food and to come into a room, she has to be invited. Eli gives Oskar the strength to hit back, but when Oskar realizes that Eli must drink other people’s blood to live he’s faced with a choice, How much can love forgive? Vampires must be invited in by their victims. Can The Snowman’s storyline follow that? Well mystery is in the bloodstained snow and the story is based on a novel written by Norwegian crime writer Jo Nesbo. It is the seventh entry in his Harry Hole series. Martin Scorcese was originally attached to direct this movie. He remained on board as executive producer.

Michael Fassbender started shooting this movie only two days after wrapping on Assassin’s Creed. The Snowman and Downsizing were the first two international feature films shot in Norway to receive funding from the new state incentive programme to attract foreign film and TV productions. The two features spent together $24 million in Norway during the Norwegian location shoots. Apparently, Fassbender bought drinks for the whole crew after a long day of shooting. The next day, rigging electrician Karl Andre Bru walked up to the actor and said jokingly: ‘thanks for the hangover man!’ Rumour has it Fassbender cracked up and was unable to keep a straight face for the rest of the day.

In the eponymous book the police discuss several Swedish serial killers, among them Thomas Quick (a.k.a. Sture Bergwall. However, Quick/Bergwall was eventually acquitted of all the alleged murders. 20