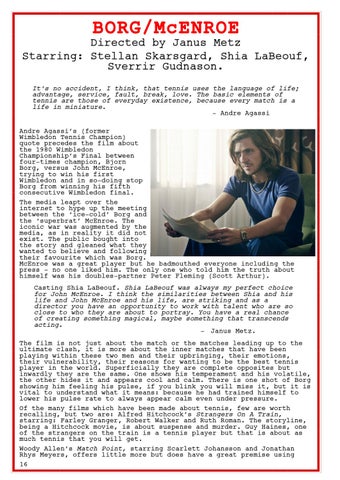 BORG/McENROE Directed by Janus Metz Starring: Stellan Skarsgard, Shia LaBeouf, Sverrir Gudnason. It’s no accident, I think, that tennis uses the language of life; advantage, service, fault, break, love. The basic elements of tennis are those of everyday existence, because every match is a life in miniature. - Andre Agassi Andre Agassi’s (former Wimbledon Tennis Champion) quote precedes the film about the 1980 Wimbledon Championship’s Final between four-times champion, Bjorn Borg, versus John McEnroe, trying to win his first Wimbledon and in so-doing stop Borg from winning his fifth consecutive Wimbledon final. The media leapt over the internet to hype up the meeting between the ‘ice-cold’ Borg and the ‘superbrat’ McEnroe. The iconic war was augmented by the media, as in reality it did not exist. The public bought into the story and gleaned what they wanted to believe and following their favourite which was Borg. McEnroe was a great player but he badmouthed everyone including the press – no one liked him. The only one who told him the truth about himself was his doubles-partner Peter Fleming (Scott Arthur). Casting Shia LaBeouf. Shia LaBeouf was always my perfect choice for John McEnroe. I think the similarities between Shia and his life and John McEnroe and his life, are striking and as a director you have an opportunity to work with talent who are so close to who they are about to portray. You have a real chance of creating something magical, maybe something that transcends acting. - Janus Metz. The film is not just about the match or the matches leading up to the ultimate clash, it is more about the inner matches that have been playing within these two men and their upbringing, their emotions, their vulnerability, their reasons for wanting to be the best tennis player in the world. Superficially they are complete opposites but inwardly they are the same. One shows his temperament and his volatile, the other hides it and appears cool and calm. There is one shot of Borg showing him feeling his pulse, if you blink you will miss it, but it is vital to understand what it means: because he had trained himself to lower his pulse rate to always appear calm even under pressure. Of the many films which have been made about tennis, few are worth recalling, but two are: Alfred Hitchcock’s Strangers On A Train, starring: Farley Granger, Robert Walker and Ruth Roman. The storyline, being a Hitchcock movie, is about suspense and murder. Guy Haines, one of the strangers on the train is a tennis player but that is about as much tennis that you will get. Woody Allen’s Match Point, starring Scarlett Johansson and Jonathan Rhys Meyers, offers little more but does have a great premise using 16