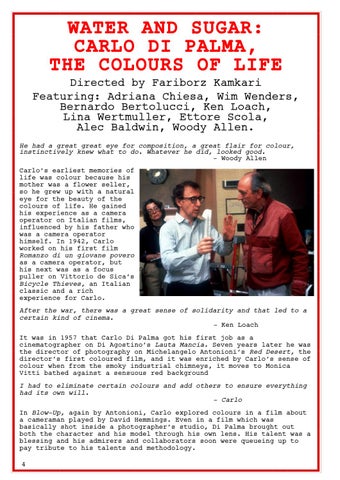 WATER AND SUGAR: CARLO DI PALMA, THE COLOURS OF LIFE Directed by Fariborz Kamkari Featuring: Adriana Chiesa, Wim Wenders, Bernardo Bertolucci, Ken Loach, Lina Wertmuller, Ettore Scola, Alec Baldwin, Woody Allen. He had a great great eye for composition, a great flair for colour, instinctively knew what to do. Whatever he did, looked good. – Woody Allen Carlo’s earliest memories of life was colour because his mother was a flower seller, so he grew up with a natural eye for the beauty of the colours of life. He gained his experience as a camera operator on Italian films, influenced by his father who was a camera operator himself. In 1942, Carlo worked on his first film Romanzo di un giovane povero as a camera operator, but his next was as a focus puller on Vittorio de Sica’s Bicycle Thieves, an Italian classic and a rich experience for Carlo. After the war, there was a great sense of solidarity and that led to a certain kind of cinema. - Ken Loach

It was in 1957 that Carlo Di Palma got his first job as a cinematographer on Di Agostino’s Lauta Mancia. Seven years later he was the director of photography on Michelangelo Antonioni’s Red Desert, the director’s first coloured film, and it was enriched by Carlo’s sense of colour when from the smoky industrial chimneys, it moves to Monica Vitti bathed against a sensuous red background I had to eliminate certain colours and add others to ensure everything had its own will. – Carlo In Blow-Up, again by Antonioni, Carlo explored colours in a film about a cameraman played by David Hemmings. Even in a film which was basically shot inside a photographer’s studio, Di Palma brought out both the character and his model through his own lens. His talent was a blessing and his admirers and collaborators soon were queueing up to pay tribute to his talents and methodology. 4