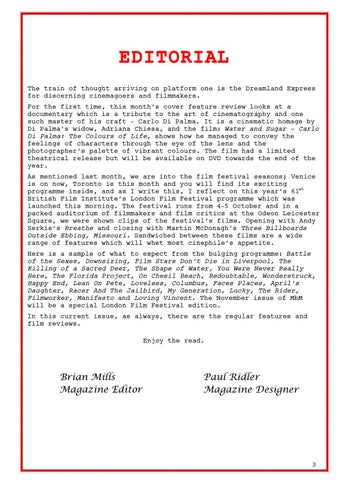 EDITORIAL The train of thought arriving on platform one is the Dreamland Express for discerning cinemagoers and filmmakers. For the first time, this month’s cover feature review looks at a documentary which is a tribute to the art of cinematography and one such master of his craft – Carlo Di Palma. It is a cinematic homage by Di Palma’s widow, Adriana Chiesa, and the film: Water and Sugar – Carlo Di Palma: The Colours of Life, shows how he managed to convey the feelings of characters through the eye of the lens and the photographer’s palette of vibrant colours. The film had a limited theatrical release but will be available on DVD towards the end of the year. As mentioned last month, we are into the film festival seasons; Venice is on now, Toronto is this month and you will find its exciting programme inside, and as I write this, I reflect on this year’s 61st British Film Institute’s London Film Festival programme which was launched this morning. The festival runs from 4-5 October and in a packed auditorium of filmmakers and film critics at the Odeon Leicester Square, we were shown clips of the festival’s films. Opening with Andy Serkis’s Breathe and closing with Martin McDonagh’s Three Billboards Outside Ebbing, Missouri. Sandwiched between these films are a wide range of features which will whet most cinephile’s appetite. Here is a sample of what to expect from the bulging programme: Battle of the Sexes, Downsizing, Film Stars Don’t Die in Liverpool, The Killing of a Sacred Deer, The Shape of Water, You Were Never Really Here, The Florida Project, On Chesil Beach, Redoubtable, Wonderstruck, Happy End, Lean On Pete, Loveless, Columbus, Faces Places, April’s Daughter, Racer And The Jailbird, My Generation, Lucky, The Rider, Filmworker, Manifesto and Loving Vincent. The November issue of MbM will be a special London Film Festival edition. In this current issue, as always, there are the regular features and film reviews.