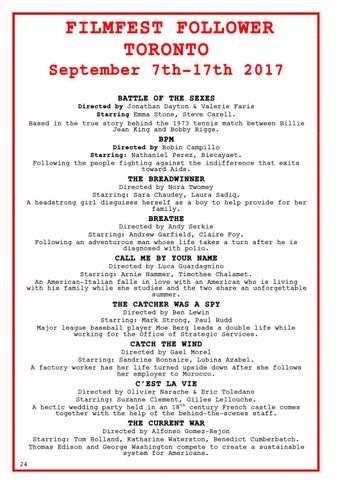 BPM Directed by Robin Campillo Starring: Nathaniel Perez, Biscayaet. Following the people fighting against the indifference that exits toward Aids.

THE BREADWINNER Directed by Nora Twomey Starring: Sara Chaudey, Laura Sadiq. A headstrong girl disguises herself as a boy to help provide for her family.

BREATHE Directed by Andy Serkis Starring: Andrew Garfield, Claire Foy. Following an adventurous man whose life takes a turn after he is diagnosed with polio.

CALL ME BY YOUR NAME Directed by Luca Guardagnino Starring: Arnie Hammer, Timothee Chalamet. An American-Italian falls in love with an American who is living with his family while she studies and the two share an unforgettable summer.

CATCH THE WIND Directed by Gael Morel Starring: Sandrine Bonnaire, Lubina Azabel. A factory worker has her life turned upside down after she follows her employer to Morocco.