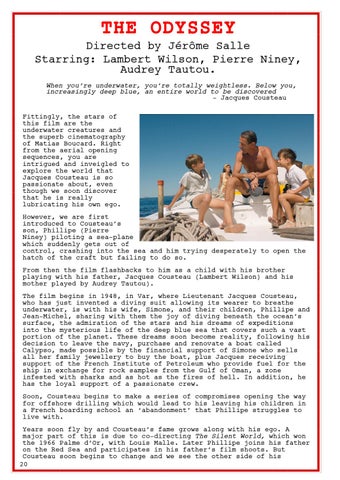 THE ODYSSEY Directed by Jérôme Salle Starring: Lambert Wilson, Pierre Niney, Audrey Tautou. When you’re underwater, you’re totally weightless. Below you, increasingly deep blue, an entire world to be discovered - Jacques Cousteau Fittingly, the stars of this film are the underwater creatures and the superb cinematography of Matias Boucard. Right from the aerial opening sequences, you are intrigued and inveigled to explore the world that Jacques Cousteau is so passionate about, even though we soon discover that he is really lubricating his own ego. However, we are first introduced to Cousteau’s son, Phillipe (Pierre Niney) piloting a sea-plane which suddenly gets out of control, crashing into the sea and him trying desperately to open the hatch of the craft but failing to do so. From then the film flashbacks to him as a child with his brother playing with his father, Jacques Cousteau (Lambert Wilson) and his mother played by Audrey Tautou). The film begins in 1948, in Var, where Lieutenant Jacques Cousteau, who has just invented a diving suit allowing its wearer to breathe underwater, is with his wife, Simone, and their children, Phillipe and Jean-Michel, sharing with them the joy of diving beneath the ocean’s surface, the admiration of the stars and his dreams of expeditions into the mysterious life of the deep blue sea that covers such a vast portion of the planet. These dreams soon become reality, following his decision to leave the navy, purchase and renovate a boat called Calypso, made possible by the financial support of Simone who sells all her family jewellery to buy the boat, plus Jacques receiving support of the French Institute of Petroleum who provide fuel for the ship in exchange for rock samples from the Gulf of Oman, a zone infested with sharks and as hot as the fires of hell. In addition, he has the loyal support of a passionate crew. Soon, Cousteau begins to make a series of compromises opening the way for offshore drilling which would lead to his leaving his children in a French boarding school an ‘abandonment’ that Phillipe struggles to live with. Years soon fly by and Cousteau’s fame grows along with his ego. A major part of this is due to co-directing The Silent World, which won the 1966 Palme d’Or, with Louis Malle. Later Phillipe joins his father on the Red Sea and participates in his father’s film shoots. But Cousteau soon begins to change and we see the other side of his 20