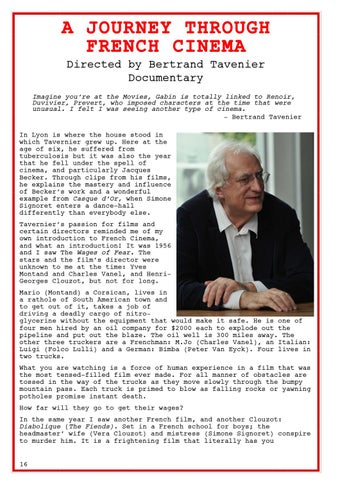 A JOURNEY THROUGH FRENCH CINEMA Directed by Bertrand Tavenier Documentary Imagine you’re at the Movies, Gabin is totally linked to Renoir, Duvivier, Prevert, who imposed characters at the time that were unusual. I felt I was seeing another type of cinema. - Bertrand Tavenier In Lyon is where the house stood in which Tavernier grew up. Here at the age of six, he suffered from tuberculosis but it was also the year that he fell under the spell of cinema, and particularly Jacques Becker. Through clips from his films, he explains the mastery and influence of Becker’s work and a wonderful example from Casque d’Or, when Simone Signoret enters a dance-hall differently than everybody else. Tavernier’s passion for films and certain directors reminded me of my own introduction to French Cinema, and what an introduction! It was 1956 and I saw The Wages of Fear. The stars and the film’s director were unknown to me at the time: Yves Montand and Charles Vanel, and HenriGeorges Clouzot, but not for long. Mario (Montand) a Corsican, lives in a rathole of South American town and to get out of it, takes a job of driving a deadly cargo of nitroglycerine without the equipment that would make it safe. He is one of four men hired by an oil company for $2000 each to explode out the pipeline and put out the blaze. The oil well is 300 miles away. The other three truckers are a Frenchman: M.Jo (Charles Vanel), an Italian: Luigi (Folco Lulli) and a German: Bimba (Peter Van Eyck). Four lives in two trucks. What you are watching is a force of human experience in a film that was the most tensed-filled film ever made. For all manner of obstacles are tossed in the way of the trucks as they move slowly through the bumpy mountain pass. Each truck is primed to blow as falling rocks or yawning potholes promise instant death. How far will they go to get their wages? In the same year I saw another French film, and another Clouzot: Diabolique (The Fiends). Set in a French school for boys; the headmaster’ wife (Vera Clouzot) and mistress (Simone Signoret) conspire to murder him. It is a frightening film that literally has you